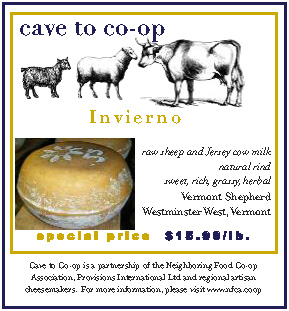 Vermont Shepherd cheeses are the oldest and most well known of the country’s sheep and mixed milk cheeses. David and Yesenia and their family pasture and milk the sheep, make and age the cheese on a 250 acre farm in Westminster West, Vermont. Vermont Shepherd cheeses are descended from a variety of Pyrenees mountain cheeses, which is fitting because a large half of their family is Spanish. The cheese has won awards for Best Farmhouse Cheese in the country and Best of Show in the American Cheese Society’s annual competition since 1993. Today, their family makes cheese in small, 10 to 30 wheel batches. Vermont Shepherd has been featured in The New York Times, Gourmet, Food and Wine, Esquire, and more.

Yesenia grew up summer’s milking cows on her dad’s farm in the Dominican Republic. David grew up tending his dad’s sheep in Vermont. Together, they make a mixed milk cheese called “Invierno”. The sheep milk comes from David and Yesenia’s sheep who are famous for the Vermont Shepherd cheese their milk produces. The cows milk comes from 12 Jersey cows who live a mile down the road. Invierno (or “winter” in Spanish) is a soft to semi-hard natural rind cheese, aged 4-5 months. Invierno is a versatile cheese with a rich, butter and mushroom flavor. It melts well and it’s delicious with cider, beer and rich savory red wines.

Here are some recipes using Invierno that highlight its savory yet slightly sweet flavor and its versatile texture.

Grate zucchinis into a colander, on medium-sized slots of a standing grater. Sprinkle 1 tablespoon of salt on top and mix into the grated zucchini. Set aside for about 15 minutes. The zucchini will produce a lot of juice and you want to try and remove most of it. After 15 minutes press down on the zucchini with a clean dish towel to squeeze out the juice. Repeat until most of the liquid is gone and the shredded zucchini is pretty dry. Place the zucchini is a medium bowl and sprinkle with the dry yeast, add the eggs, the herbs, the cheese and mix until blended. Sift the flour on top of this mixture and gently fold it in. You want the consistency of muffin batter. Cover the bowl and set aside for 30 minutes. Heat enough oil in a heavy skillet to generously cover the bottom by ¼ inch. When the oil is hot, scoop generous 2 tablespoon mounds of the batter into the pan. Cook on one side until golden brown, flip and brown the other side. Drain on paper towels and serve hot with sour cream and lemon.

Roast the unhusked corn in the pre-heated oven directly on the rack or cook on a grill until heated through and crisp-tender, about 15 minutes. Let cool. Shuck and cut kernels from the cobs. Discard cobs. Heat the oil in a large skillet over medium heat. Add corn kernels and sauté until heated through and light golden in spots, 3-5 minutes. Add the butter and stir until melted. Season to taste with salt and pepper. Transfer the corn to a large wide bowl or platter. Sprinkle the corn with the jalapeño and the pepper flakes. Squeeze the lime wedges over it, sprinkle with the cheese, chives and lime zest. Serve.

Lightly butter 8- ¼ cup custard cups and coat the inside of the molds with the chopped walnuts. Heat the cream in a heavy saucepan  until very hot but not boiling. Beat the eggs with the sugar, add the finely grated Invierno and then slowly add the hot cream. Mix well. Ladle this mixture evenly between the molds. Place the molds, leaving space around each, in a large baking dish with sides. Pour hot water in the pan halfway up the sides of the molds. Bake until knife inserted into the middle of the custard comes out clean, 30 to 40 minutes. Carefully remove the pan from the oven, remove the molds form the water bath and place them on a baking rack to cool. Refrigerate custards until ready to serve. Invert the custards on serving plates and garnish with the whipped cream, if desired.