Each month, your Neighboring Food Co-ops feature our region’s artisan cheesemakers by offering a specially selected cheese at great price. Look for the “Cave to Co-op” sign in the cheese section at your local food co-op. To find one near you, visit www.nfca.coop/members 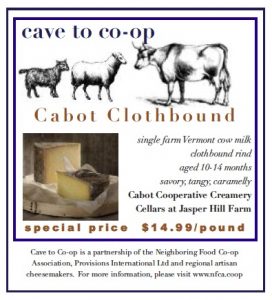 In 1919, 94 farmers from the communities around Cabot, Vermont joined forces to purchase the village creamery and began producing butter and shipping fluid milk as a Dairy Cooperative. The cost of joining the venture was $5 per cow and over the next two decades the Cooperative thrived. In 1930, cows outnumbered people in Vermont by 421,000 to 359,000. That same year, Cabot began making cheese. By 1960, 600 farm families had joined Cabot Cooperative. But as the years went by the number of farms in Vermont diminished and in the 1980s sunk below 2000, less than one fifth of what it had been just a few decades before. In 1992, Cabot Cooperative joined forces with Agri-mark, a southern New England Co-op dating back to 1918. Today the combined Cooperatives include more than 1,200 farms in New England and upstate New York.

In 2003, Cabot Creamery asked Jasper Hill Farm to age a special batch of English-style clothbound cheddar. This was the beginning of a revolutionary partnership. Kempton Family Farm in Peacham, VT was selected as the sole milk source for Clothbound, and Cabot makes this extraordinary cheese the old-world way – one vat at a time.

Once unmolded from their shaping hoops, the infant wheels are individually wrapped with muslin and brushed with lard before they undergo a ten to fourteen month maturation period. The extra care involved in curing a clothbound cheese requires a customized aging environment, with proper temperature, humidity, and airflow. The cheddar vaults at the Cellars at Jasper Hill are majestic and awe-inspiring – Cabot Clothbound is truly a monumental undertaking. A team of affineurs practice a constant cycle of care for Clothbound and the wheels are tested, tasted, and monitored for quality during their entire life cycle.

Cabot Cooperative Clothbound Cheddar is best enjoyed on its own with a slice of crisp new apple or pear. It has all the characteristic texture of an English-style bandaged cheddar; smooth and dense, slightly brittle, with the sweet caramel and milky flavors that set it apart from other clothbound varieties. It is simultaneously sweet, savory, nutty and tangy.

Lightly beat eggs with half the grated cheddar, the peppers and scallions, salt and pepper.
Melt butter in a medium skillet over medium heat and lightly scramble egg until just set.
Remove pan from heat. Heat tortillas and place two on the counter. Divide the egg mixture evenly between the two, then sprinkle with remaining cheese. Cover with the other tortillas and heat in a non-stick skillet for 3 minutes over medium heat, then turn and heat the other side until the cheese is melted and the tortilla is just golden crisp. Cut into wedges and serve with salsa and sour cream. 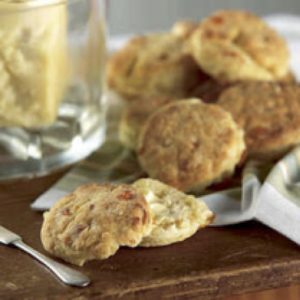 Sift four, baking powder and salt into large bowl. Stir in the cheese. With a fork and a very light hand, stir in the cream a little at a time until no dry bits of flour remain and a soft dough has formed. (You may not need all the cream). Turn the dough out onto a lightly floured work surface and very gently knead it about 6 times. Pat the dough into a ¾ inch circle and cut rounds with a floured cutter, pressing scraps together to cut additional biscuits. Place biscuits 1 inch apart on a baking sheet covered with parchment paper and bake for 12 to 15 minutes or until golden. Serve with butter and honey.

CAVE TO CO-OP IS A PARTNERSHIP BETWEEN PROVISIONS INTERNATIONAL AND THE NEIGHBORING FOOD CO-OP ASSOCIATION (NFCA) TO SUPPORT LOCAL, ARTISANAL CHEESE PRODUCERS IN OUR REGION AND MAKE THEIR PRODUCTS MORE EASILY AVAILABLE TO CO-OP SHOPPERS. THE NFCA IS A NETWORK OF MORE THAN 30 FOOD CO-OPS IN NEW ENGLAND, LOCALLY OWNED BY MORE THAN 130,000 PEOPLE LIKE YOU. FOR MORE INFORMATION, PLEASE VISIT WWW.NFCA.COOP.