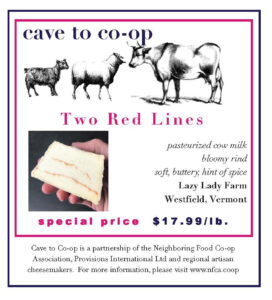 Two Red Lines is a small, soft, rounded pyramid that has its namesake lines running through the paste and a layer of ash hiding under the rind.

Laini is a woman who needs no introduction; you cannot get too far into Vermont cheese history, goat cheese, or heck, American cheese history without hearing about Lazy Lady Farm and the Goat Ladies.

Laini is one of a handful of ladies that in the 80’s brought much needed attention and acclaim to goat cheese along with legendairy cheesemakers Alison Hooper of Vermont Creamery, Judy Schad of Capriole Goat Cheese, Mary Keehn of Cypress Grove.  It’s hard to find Laini’s cheeses outside of New England, and she still tends to her goats and makes the cheese on the farm, with limited help. 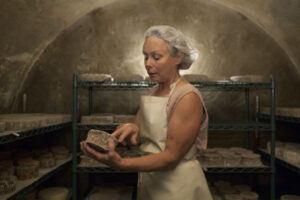 Laini started Lazy Lady in 1987 and it is as eclectic and unique as Laini herself. While not certified organic, the farm operates using organic practices: organic grains, organic straw for bedding, intensive rotational grazing, and fertile soils made from composted manure and the added minerals for hay production.
Laini operates the farm by utilizing 17 solar panels and a 1K-wind generator. When there is no wind or sun, Lazy Lady relies on a small generator to replenish the battery bank.

Laini raises and milks a herd of over 40 registered Alpine goats, a far cry from the handful of sheep and one goat named Blooper that she started with 25 years ago. Then, the farm was operated with candles, gas lamps, hand water pumps, outdoor privy and a car battery for running a radio. 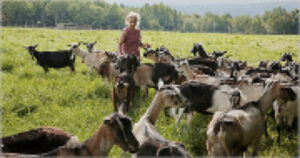 From 1987-1994 cheese was made in the kitchen. Their first licensed ‘plant’ came in 1995 and it was a 10 x 12 room where Laini made cheese in 5-gallon batches. The first proper cheese cellar was built in 1996. In 2003, with the help of a loan from the Vermont Community Fund, a larger plant with a 50-gallon cheese vat was built, allowing Laini to make cheese 5 days a week.

Laini walks the goats in the woods, weather permitting, to ensure they eat their fair share of herbs and woodland plants. They are sincerely and lovingly cared for, each and every one. She calls them her ‘working girls’ and they are anything but lazy! 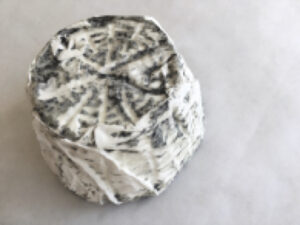 In addition to their contributions to the cheese world Laini’s goats, and their kids, helped start some well know cheesemaking operations; Twig Farm, Barn First, Sage Farm, Oak Knoll and Bridgman Hill to name a few.

Laini makes many varieties of cheese, following the seasonality of her herd’s milk production. She is a woman of intense curiosity and strongly held opinions. Frequently she names her cheese to fit a particular politician or political issue of the moment: Barick Obama, Toilet Paper, and Nasty Goat to name a few.

Laini is regarded across the country as an American cheesemaker who has remained true to the art of the profession and the lifestyle of a small farmer. Working 60+ hours a week, Laini answers to no one but herself and that herd of goats. A bona fide Vermont pioneer whose cheese is consistently delicious, clean and exciting.

Two Red Lines is perfect for just eating by the wedge just off your knife, but check out the recipes below. 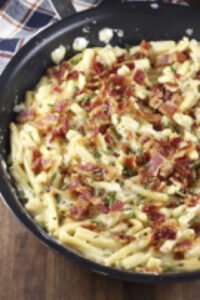 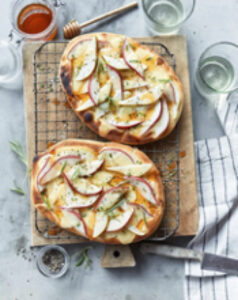 1. Preheat the oven to 400°F. Place the naan in a single layer on a baking sheet. Brush lightly with the olive oil and top evenly with the Two Red Lines, pears and rosemary if desired.
2. Bake until the pears have softened and the cheese has melted, 7 to 10 minutes. Drizzle the flatbreads with a tablespoon of honey (or more, if desired) and season with a pinch of salt and a couple grinds of pepper. Cut the flatbreads into pieces and serve warm.

Cave to Co-op is a partnership between Provision International and the Neighboring Food Co-op Association (NFCA) to support local, artisanal cheese producers in our region and make their products more easily available to co-op shoppers.  The NFCA is a network of more than 35 food co-ops in our region — including yours — that are working together to advance their vision of a thriving regional economy, rooted in a healthy, just and sustainable food system and a vibrant community of co-operative enterprise.  For more information, please visit www.nfca.coop.