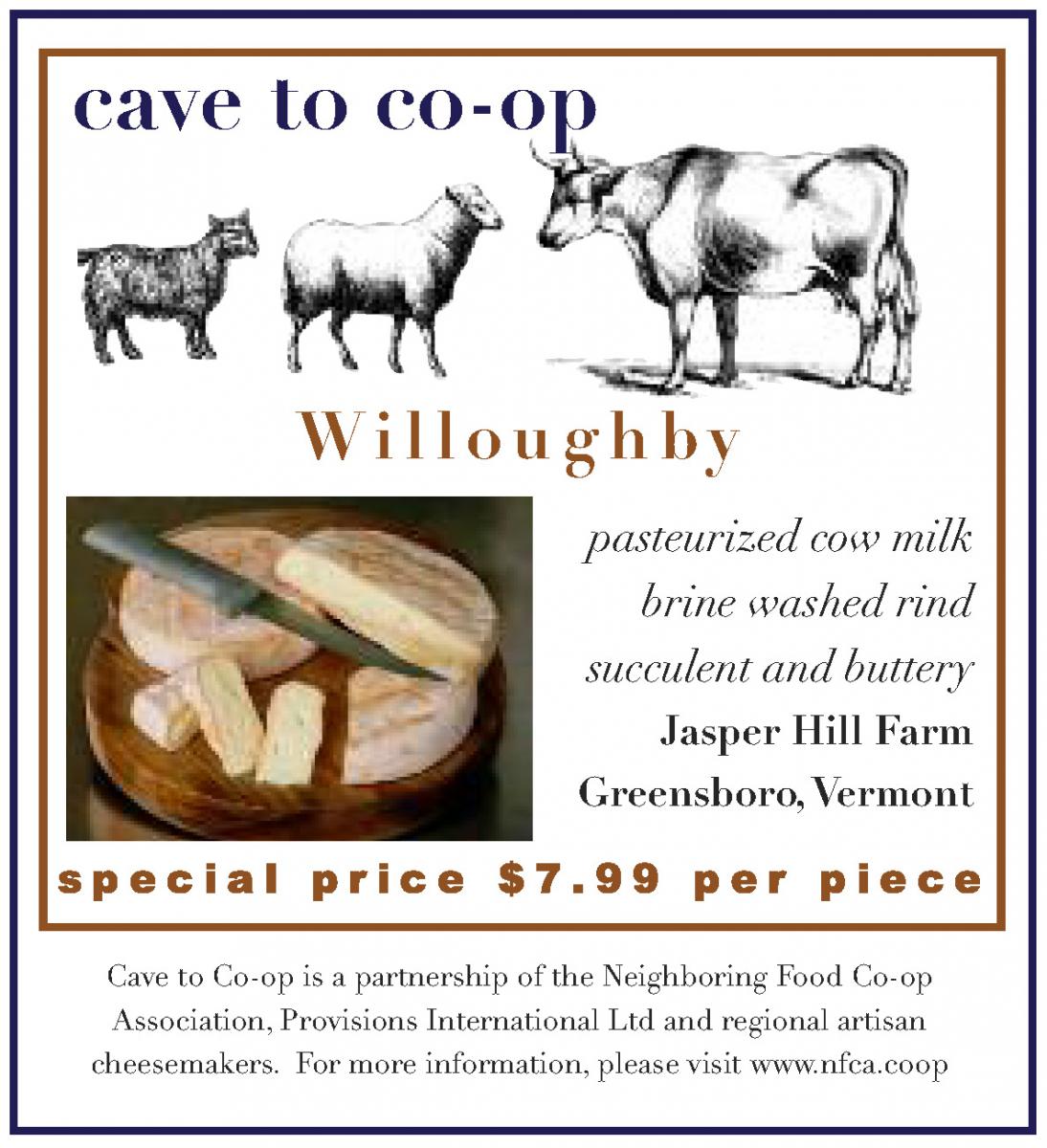 “Willoughby” is an original creation of Marisa Mauro’s Ploughgate Creamery, a Cellars collaborator that ceased production of the cheese after a creamery fire in 2010. With Marisa’s blessing we resurrect this pudgy little washed-rind and have continued to develop the recipe at Jasper Hill Creamery.

This succulent and buttery washed-rind cheese has aromas of peat, roasted beef and onions – a strong and complex front for the subtle milky, herbal, ripe-peach flavors within. Willoughby has a thin, tender, rosy-orange rind, which adds earthy dimension to the texture and flavors of the gooey interior.

Willoughby’s small format is ideal for selling whole on the retail counter, or quickly rotating through a professional kitchen. The pudding-like texture may become softer with age, but should remain sliceable for portioning until 9 weeks after its production date. Pair with Juicy rose, funky saison beer or raw floral honey.

The Cellars at Jasper Hill is an innovative 22,000 square foot underground facility located in Greensboro, VT. The Cellars were constructed for the purpose of providing affinage, or aging expertise, as well as distribution and marketing services for local cheesemakers so that they may access the burgeoning market for artisan cheese nationwide.

Preheat the oven to 375°. Slice the potatoes and onion thinly, and set aside.

Melt the butter in a pan over medium heat, add the bacon and cook until crisp, about 10 minutes. We find that when cooking in cast iron or a similar heavy skillet, you can omit the butter. When done, remove the bacon and set aside, leaving the fat in the pan.

Keeping the pan over medium heat, add the onion to the rendered bacon fat and stir to coat. Cook for 10-15 minutes, until translucent and lightly golden. Add the wine and continue to cook, stirring often, until the liquid is reduced by about half. Stir in potatoes and season with salt & pepper, and cook for another 8-10 minutes until the potatoes are just tender. Remove from heat and add the bacon, stirring to combine. Spread the potato mixture in a buttered, oven-proof casserole dish.

For a dramatic presentation, slice each wheel of Willoughby in half horizontally, producing two thin full-moons of cheese from each wheel. Lay these gently on top of the potato mix, cut-side up. For less drama but more even cheese distribution, cut into cubes (including the rind) and layer evenly on top of the potato mixture. Bake for 25-30 minutes, or until the cheese is golden brown and bubbling.