Was this newsletter forwarded to you? Subscribe here to keep up to date on NFCA News!

On July 2, co–operatives all around the world will celebrate the 100th International Day of Co–operatives (#CoopsDay).

“Co-operatives are answering the wake-up call of UN Secretary-General Antonio Guterres, who warned that the world is ‘on the edge of an abyss — and moving in the wrong direction’, and exclaimed that ‘to restore trust, and inspire hope, we need co-operation, we need dialogue, we need understanding’. For nearly two centuries, co-operatives have been pulling in this direction. This was amply highlighted at the 33rd World Co-operative Congress, held by the International Co-operative Alliance in December 2021, which focused a spotlight on how their shared identity is moving co-operatives to take action to address the world’s problems” declared Bruno Roelants, Director General of the ICA.

The ICA invites co-operators everywhere to spread the word about how our human-centred business model, inspired by the co-operative values of self-help, self-responsibility, democracy, equality, equity, and solidarity and the ethical values of honesty, openness, social responsibility and caring for others, is building a better world.

Operating all around the world, in many different sectors of economy, co-operatives have proven themselves more resilient to crises than the average. They foster economic participation, fight against environmental degradation and climate change, generate good jobs, contribute to food security, keep financial capital within local communities, build ethical value chains, and, by improving people’s material conditions and security, contribute to positive peace.

“Co-operatives are the only enterprise model with globally agreed principles that rest on a foundation of shared ethical values” added Bruno Roelants.

The ICA calls on co-operators and partners around the world to get ready to celebrate #CoopsDay on 2 July and to show the world how Cooperatives Build a Better World.  The 2022 Coopsday actions’ pack including the logo, key messages and other digital resources will be available soon.

About the International Day of Cooperatives

Marked by co-operatives worldwide since 1923 and officially proclaimed by the United Nations General Assembly on the centenary of the ICA in 1995, the International Day of Co-operatives is celebrated annually on the first Saturday of July.

The aim of #CoopsDay is to increase awareness of co-operatives and promote the movement’s ideas of international solidarity, economic efficiency, equality, and world peace. Since 1995, the ICA and the United Nations through Committee for the Promotion and Advancement of Cooperatives (COPAC) have jointly set the theme for the celebration of #CoopsDay.

Through #CoopsDay, local, national and global policymakers, civil-society organizations and the public in general can learn about the contribution of co-operatives to a secure future for all.

For resources to help your co-op celebrate, visit https://coopsday.coop. 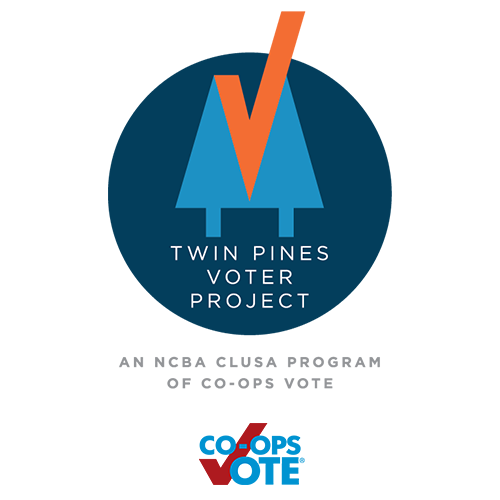 Co-ops are more than places of business. They play a central role in the community and are uniquely positioned to support voter registration, share critical voting information, and help people make a plan to vote.

Earlier this year, NCBA CLUSA launched the Twin Pines Voter Project—a program of Co-ops Vote. The TWIN PINES VOTER PROJECT is a non-partisan engagement activity to boost democratic participation among co-operatives through voter registration and voting in public elections. As members of people-centered businesses, co-ops are uniquely positioned to support voter registration, share critical voting information and help community members make a plan to vote. In partnership with Co-ops Vote, the Twin Pines Voter Project will educate and engage candidates and voters on issues important to co-operatives, including:

Any U.S.-based co-operative business or co-op support organization can participate. Choose from one of the participation levels that is right for your co-op. Become an Influencer, Pioneer or Evergreen Co-op by completing and reporting activities that promote democratic participation in your co-op and community. Your co-op can also become a Community Partner of Co-ops Vote.

As businesses defined by democratic member control and participation, voting is in our co-operative DNA and enshrined in the 5th Cooperative Principle—Education, Training and Information. Promoting democratic participation in your co-op and community is also an essential way to raise awareness of issues that directly affect co-operatives. Make your voice heard by local, state and federal elected officials at the ballot box! 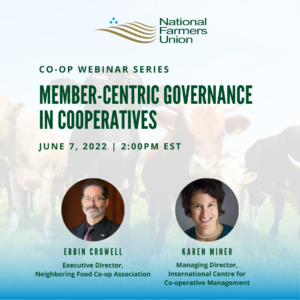 The latest installment in the Co-op Webinar Series, Member-Centric Governance in Co–operatives, is available to replay on YouTube!

The ultimate aim of co-operative governance is to fulfill the organization’s goals in a way that is consistent with its core purpose, aligned with the Co-operative Principles, and supportive of success in the long-term. The most appropriate and effective models are member-centric, embrace joint ownership and control, and support democratic decision-making that will guide the activities of the enterprise. This presentation outlines effective governance characteristics and provide examples of structures and processes for success.

Each month our Cave to Co-op partnership between Provisions International and the Neighboring Food Co-op Association (NFCA) offers a delicious regional cheese featured at a great price. Strengthening our local and regional farmers and producers by supporting artisanal cheesemakers is a key goal of the  Cave to Co-op program.

June’s featured cheese is Butter Cheddar from Billings Farm in Woodstock, Vermont. The Billing’s herd is cared for by the Deome family with cheese making taken on by Grafton Village Cheese.

Caring for Billings’ herd is a family affair. The Deome family: Farm Manager Chuck leads the team followed by his son Matt who is the Assistant Farm Manager who is in charge of genetics and milk Production. Daughter Emily is the lead milker, youngest son Brian cares for all the young animals, and Chuck’s wife Amy is the farm’s teamster.

classics such as grilled cheese and mac n’ cheese. It is mild and creamy with a slightly salty or acidic taste reminiscent of Muenster or Gouda cheeses. Known for its delicate flavor, it literally melts in your mouth. The cheddar is made from raw, Jersey cow milk exclusively from the Billings herd, is aged for at least 60 days and contains no additives, preservatives, or artificial coloring.

Billings Farm’s Jersey cows have a pedigree that dates back to 1871 and is still considered one of the finest Jersey herds in North America. These purebred, registered Jersey cows are known for their award-winning genetics, affectionate disposition, and high-quality, high-protein milk.

Billings Farm is owned and operated by The Woodstock Foundation, Inc., a non-profit educational institution founded by Laurance and Mary Rockefeller in 1968, the Billings Farm & Museum was established in 1983 to preserve the historic Billings Farm as well as the character and heritage of rural Vermont.

You can find more information, photos and recipes on our June Cave to Co-op page.

Neighboring Food Co-ops Join Together to Slash Their Trash

Members of food co-ops across the Northeast joined together in pledging to reduce waste and ‘Slash Your Trash’ during the Month of April — the 52nd Anniversary of Earth Day in the U.S.

As a co-operative of Food Co-ops across the Northeast, the Neighboring Food Co-op Association (NFCA) works to foster innovation and shared success among its member co-ops.  In April we worked with co-op leaders to launch a “Slash Your Trash” Challenge designed to engage co-op members and shoppers in efforts to address sustainability, waste reduction, and climate change.

In this first year, 15 of our member food co-ops participated in the Slash Your Trash challenge, and over 956 co-op shoppers pledged to reduce waste in their personal lives and greater community, supported by their co-ops in many ways including providing opportunities to purchase goods in bulk, offering incentives for bringing in bags, containers, and cups, hosting community-wide recycling and waste diversion events, etc.

The Seventh Co-operative Principle, Concern for Community, calls on co-ops and the members around the world to “work for the sustainable development of their communities.” As democratically organized, community-based businesses, co-ops are designed to meet member needs and goals rather than maximizing profit or short-term growth and can focus on social and environmental priorities through their purchasing priorities, operational practices. Through its “Co-ops for 2030” campaign, the International Co-operative Alliance has committed the movement to supporting the United Nations’ Sustainable Development Goals (SDGs), which seek to build shared peace and prosperity for people and the planet, now and into the future.

The 292 million tons of waste (nearly 1,800 pounds per person every year) generated in the US in 2018 was primarily made up of plastics, paper, paperboard, and food.   As individuals, we can take basic steps to reduce our waste. And working together with our co-ops as a community, we can have a big collective impact!

Thank you for joining up with your local food co-op to help our communities Slash our Trash!

Find out more at https://nfca.coop/slashyourtrash/

BUDAPEST – Earlier this month, National Farmers Union (NFU) President Rob Larew participated in the 2022 General Assembly of the World Farmers’ Organisation (WFO) in Budapest, Hungary. The WFO General Assembly convened farmers’ leaders from all over the world, representatives of international organizations, governments, and the private sector. During the course of the three-day event, attendees met to share and exchange visions and ideas on challenges and opportunities for the agricultural sector at the global level.

Larew was a panelist for a discussion of the sustainability of the livestock sector and how farmers and ranchers can contribute to climate solutions.

“It’s been said, ‘If you’re not at the table, you’re on the menu.’,” Larew said. “In the case of livestock production and climate policy, if farmers and ranchers are not at the table, we’re off the menu. Now is the time to engage and consider the ways that livestock agriculture can be a participant in the global effort against climate change.”

Larew also brought the message of NFU’s Fairness for Farmers campaign to the global stage, garnering a ringing endorsement of the effort to combat corporate monopolies in agriculture from President Theo de Jager of South Africa.

“Farmers and ranchers around the world have many different methods of production, crops, and perspectives. There are shared struggles, however, and monopolization of our markets is a problem everywhere,” Larew said. “I am glad to share the message NFU has amplified in the U.S. through the Fairness for Farmers campaign and hope that we can work with our friends around the world to ensure farmers and ranchers have the ability to thrive.”

NFU’s Fairness for Farmers campaign has brought the devastating impact of monopolies on family agriculture into the national, and now international, spotlight. Campaign priorities include addressing issues such as increased transparency and market competition, enforcement of competition laws, excessive costs for fertilizer, supply chain vulnerabilities, and increased farm equipment costs.

Our Local Farmers Need You!

National Farmers Union advocates on behalf of nearly 200,000 American farm families and their communities. We envision a world in which farm families and their communities are respected, valued, and enjoy economic prosperity and social justice.  Farmers are invited to join the New England Farmers Union chapter – and consumers can join as a “Friend of the Farmer” for just $15.  For more information, please visit www.newenglandfarmersunion.org.