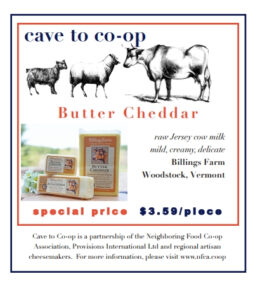 Billings Farm was established in 1871 by Frederick Billings, a native Vermonter known for his work as a lawyer, railroad builder, and pioneer in scientific farm management and reforestation. Billings set out to make his 270-acre Woodstock farm a model dairy operation for farmers in the region, founded on the principles of efficiency, sustainability, and responsible land use. Now owned and operated by The Woodstock Foundation, Inc., a non-profit educational institution founded by Laurance and Mary Rockefeller in 1968, the Billings Farm & Museum was established in 1983 to preserve the historic Billings Farm as well as the character and heritage of rural Vermont.

After an interval of almost 70 years, Billings Farm is once again drawing upon their 150-year tradition of dairy excellence. Billings Farm Cheddar is made from 100% raw milk exclusively from the Billings herd of over 40 purebred registered Jersey cows, with no additives, preservatives, or artificial coloring.

Caring for Billings’ herd is a family affair; Farm Manager Chuck leads the team followed by his son Matt who is the Assistant Farm Manager who is in charge of genetics and milk Production. Daughter Emily is the lead milker, youngest son Brian cares for all the young animals, and Chuck’s wife Amy is the farm’s teamster.

Butter Cheddar, also known as Butterkäse, is mild and creamy with a slightly salty or acidic taste reminiscent of Muenster or Gouda cheeses. Known for its delicate flavor, it literally melts in your mouth.

Butter Cheddar is a very child-friendly cheese that is also well suited to classics such as grilled cheese and mac n’ cheese. Try one of these recipes to see how versatile Butter Cheddar can be in the kitchen.

Inspired by Elvis’ love of peanut butter and banana . . . . don’t knock it till you try it! 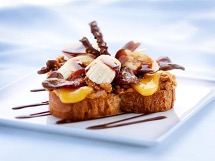 Place bacon slices on baking sheet pan with sides and bake until lightly browned and starting to crisp, about 5-6 minutes. Meanwhile, mix brown sugar and maple syrup until smooth. Brush hot bacon slices with mixture, using a pastry brush. Return to oven for another 5-6 minutes, turning once and being careful not to burn sugar. Remove to cooling rack and let cool.

Heat griddle or sauté pan over medium heat. Butter one side of bread slices. Spread other side with peanut butter. Top each slice, peanut butter-side up, with 1 Butterkäse slice and some banana slices. Place butter-side down on griddle and grill until sandwich bread bottoms are light golden brown. Cover the pan if cheese is not melting. Meanwhile, heat chocolate sauce until warm. Dip each slice of bacon into warm chocolate to cover half of strip and place over bananas. To serve, drizzle with additional chocolate sauce. makes 4 ‘sandwiches’ 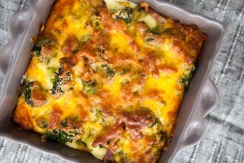 makes one 9X5 inch loaf cake, pre-heat oven to 350°, line the bottom of a 9×5 inch loaf pan with parchment paper