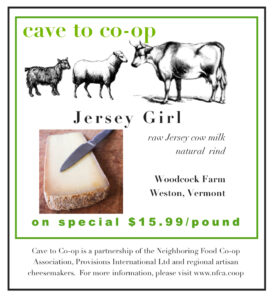 Mark Fischer was one of the first apprentices to work with David Major at Vermont Shepherd in Putney, Vermont. Transplants from New York City, the Fischers came to Vermont to raise their family and plant roots in a kinder more rural world than that of the Bowery. They eventually bought land in Weston, acquired a herd of sheep and built a house, barn and small cheese making facility of a similar design to that of Major Farm. 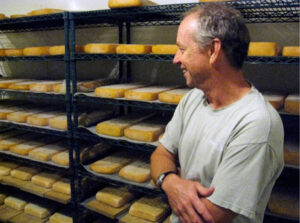 Originally, the Fischers used the milk from their own flock of sheep for the sheep cheeses, and bought milk from neighboring Jersey Girl Farm for their cow milk cheeses. Though it started with just one room, the creamery has expanded over the years, so that now it is a full-fledged operation, with two walk-in aging spaces, production, packaging and distribution
spaces.
Jersey Girl is made from – you guessed it – Jersey cow milk which is 20% higher in calcium than Holstein, alongside vitamins A, D, E, and B12. It also has an average of 18% more protein than the average Holstein’s milk. 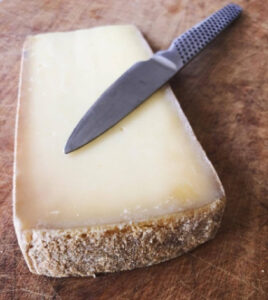 Jersey Girl is a natural rinded tomme and is super buttery, thanks to the Jersey milk. It also has notes of butterscotch, dried hay, and the occasional whiff of barnyard.

Named after the farm from which our cow’s milk comes from, this cheese has a semi soft paste and aromas of cultured butter. It has a smooth lingering mouth with a sharp buttery finish. 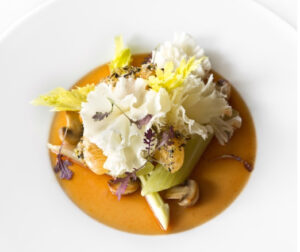 1. To make the caramelized clementines, remove as much pith as possible and separate out the fruit into individual segments. Place a frying pan over a medium heat and sprinkle the sugar over the base of the pan, adding a dash of cold water to coat
2. Without stirring, allow the sugar to caramelize slightly then add the clementine segments. Swirl or stir to coat fully in the caramel, then remove from the heat and scatter over the seeds. Set aside to cool in the pan
3. Prepare the celery by removing the leaves and any thick ribs from the stalk using a vegetable peeler. Reserve the leaves for serving and chop the stalk into 1/2 in diamonds
4. Add the oil to a clean frying pan and place over a medium heat. Add the mushrooms to the pan along with the chopped celery stalk, tossing together with a little salt and pepper. Allow to cook through for a few minutes, until the mushrooms are turning golden at the edges
5. To make the sauce, pour the Pimm’s and Martini into a small pan and place over a gentle heat. Once heated through, carefully flame the alcohols with a lit match and allow the flames to die down. Stir through the lemon juice and set aside
6. To serve, divide the celery and mushrooms between plates and pour over a little of the sauce, topping with the caramelized clementine segments and reserved celery leaves. Shave the Jersey Girl as thinly as possible, allowing it to fold over so that it resembles flowers as pictured. Place over the clementines and garnish with the mustard cress to serve