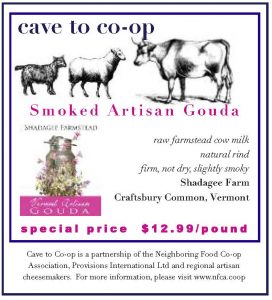 A raw farmstead cow milk with a natural rind and lightly smoked flavor.

Cheesemaker Marjorie Urie and family live and work on their Shadagee Farmstead in Craftsbury Common. Brett and Marjorie took over the family farm in 2001 after 12 years farming with Brett’s parents. In 2009 they built a state of the art dairy facility and the way was paved for Marjorie to realize her dreams of turning their beautiful milk into beautiful cheese. And beautiful cheese it is!

Smoked Artisan Gouda is made from the raw farmstead cow milk of their herd. The cheese is firm, but not dry, and with a slight crystallization similar to traditional aged Dutch Gouda. Its slightly smoky flavor make this a very versatile cheese, great on its own and delicious in cooking. Pair it with eggs or vegetables, put it in sandwiches or melt it on a burger. Here are some recipes that use Smoked Artisan Gouda in ways that highlight its mild sweet and smoky qualities. 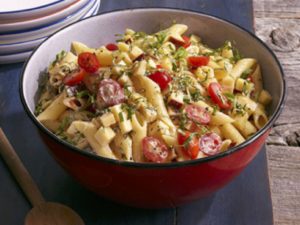 Cook the pasta according to the package directions. Rinse under cold water, drain and set aside. In a medium bowl mix the mayo, milk, vinegar, ½ t salt, pepper to taste and adobo sauce or minced chipotle.

In a large serving bowl, mix the drained pasta and the sauce, adding the tomatoes and the cheese. Taste for seasoning and add more salt, pepper or vinegar as needed. Refrigerate for 2 hours then add the basil and gently toss. Serve. 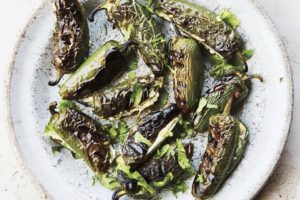 Heat a grill or a grill pan until very hot. Slice the peppers in half and de-seed them,  wearing rubber gloves! Blend the cream cheese and Gouda in a bowl with salt and pepper to taste, mashing to combine well. Fill the pepper halves evenly with this mixture and press the halves back together. Put the peppers on the grill pan, cover with a metal bowl and cook, turning once very carefully, until the peppers are soft, brown and charred in spots and the cheese has melted. Arrange on a platter and sprinkle with cilantro. Serve.