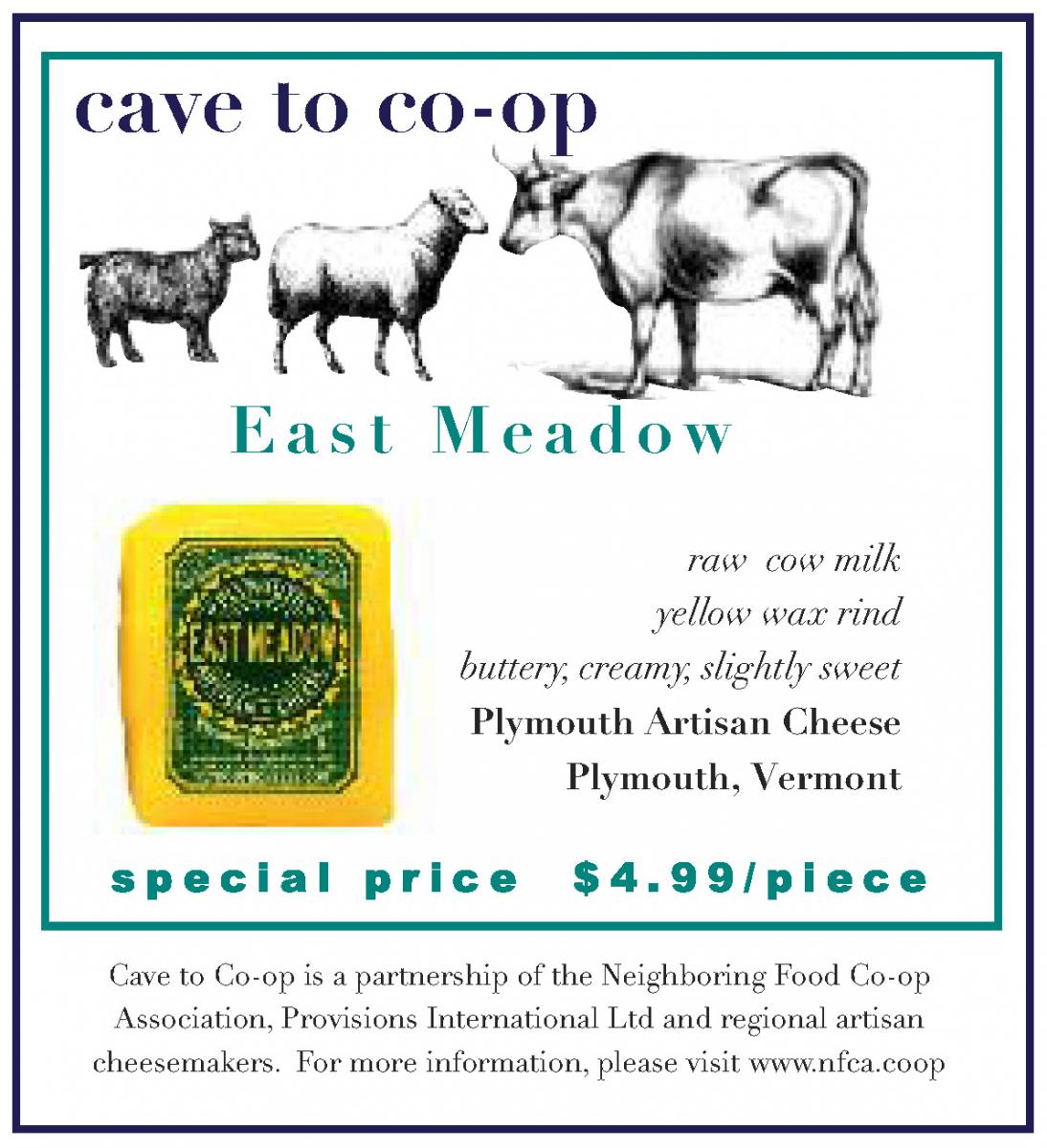 The Plymouth Cheese Factory is the second oldest cheese factory in the United States, producing high quality and distinctive artisan cheeses for over 125 years. The factory still occupies the same site and building as it did when it was built in 1890 in Plymouth, Vermont by Col. John Coolidge, father of Calvin Coolidge, the 30th President of the United States. John Coolidge, a dairy farmer, created Plymouth Cheese as a means of turning extra milk into a product with a longer shelf life, using the same exacting granular curd recipe that the first European settlers brought with them to the New World.

Jesse Werner has revived that recipe, and the original way they used to dip the cheese in wax. Plymouth Cheese is the closest thing consumers can find to the cheeses America’s first farmers produced in the 1600’s. Plymouth Artisan Cheese may be the only cheesemaker that still produces this distinctive and original American heritage cheese.

East Meadow is a raw cow milk, natural wax covered cheese aged between 3 to 4 months. Its fruity fresh taste makes it a natural choice for children and its creaminess makes it perfect in the kitchen: try adding it to your favorite cornbread or muffin recipe, using it for grilled cheese or melt it over vegetables or chili. East Meadow is delicious on its own, in sandwiches and for a snack, but here are a few recipes that highlight its versatility.

Put the cooked potatoes in a bowl and mix with the chili powder, salt and pepper. Mix in the grated cheese. Coarsely chop the greens and blend them in a food processor with about 1 cup of the salsa and pulse 5 times. Put the tortillas on a work surface and spread the greens mixture evenly over the bottom half of them. Top the greens with equal portions of the potato/cheese mixture, then fold the top half of the tortillas over the filling, pressing gently to compact them. Brush oil on the tops. Heat a large non-stick pan over medium heat and put in two of the tortillas, oiled side down. Brush the exposed tops with a bit more oil and push gently on them to compact the tortillas even a bit more. Cook until the bottom sides are brown, around 3 minutes. Carefully flip them and cook the other side. Transfer to the baking sheet and repeat with the other two tortillas. Cut into wedges and serve with more salsa.

Melt the butter in a small skillet over medium heat and sauté the mushrooms for 4-5 minutes until soft, then add the spinach, cover the pan and turn off the heat. Remove the top ¼ inch off each roll and carefully scoop out the inside and put the rolls on a baking sheet. Save the crumbs for something else. If using bacon, divide it equally between the rolls, then top it with half the cheese. Stir the mushroom-spinach mixture, taste for salt and pepper. Place an equal amount on top of the cheese in each roll. Crack an egg on top of the spinach and sprinkle with the scallions and the remaining cheese. Bake for 10-12 minutes, until the egg is cooked and the cheese is melted. Serve hot.

In a medium mixing bowl combine the yogurt, mayonnaise and honey. Stir until very smooth.  Add the cheese, fruit and nuts to the yogurt mixture until evenly coated Refrigerate 1-2 hours until well chilled. Garnish with whole fruit.