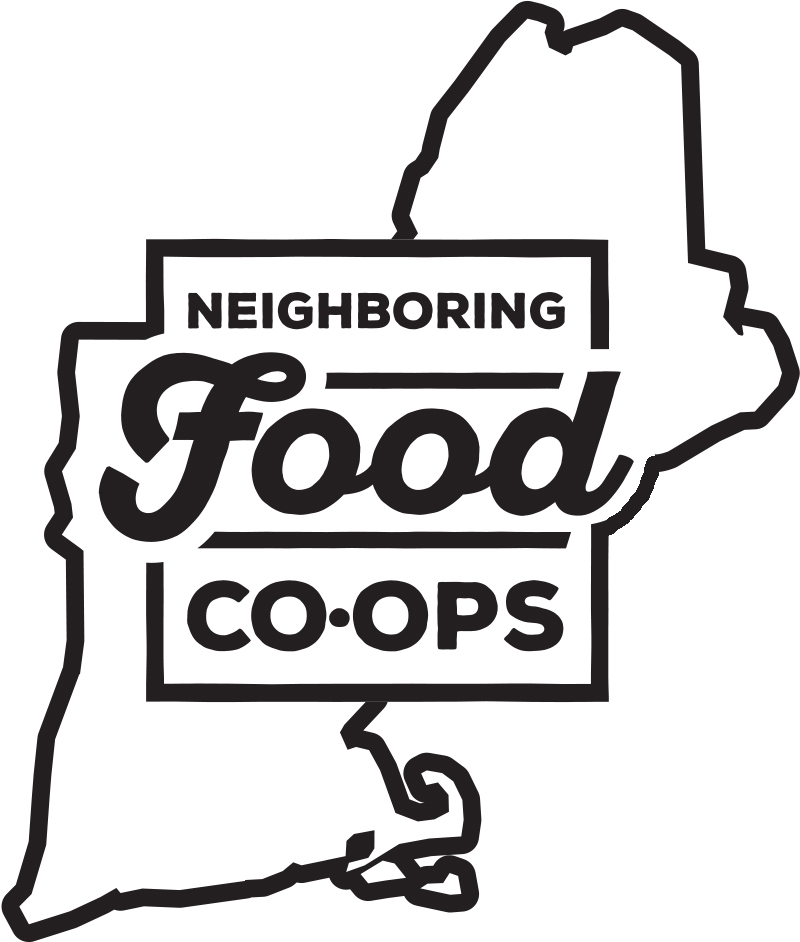 This year’s CCMA Conference, held in Portland, OR, was organized around the theme of “Courageous Evolution: Strategies for Strong Co- 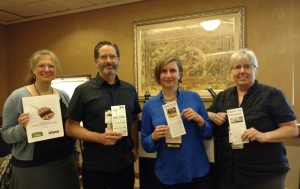 ops and Communities,” offering an opportunity for food co-ops across the country to network and share ideas for success in a crowded marketplace.

Neighboring Food Co-op Association (NFCA) staff were proud to serve on the planning committee for the event, organized by the University of Wisconsin Center for Cooperatives, and to share the collective impact of our member co-ops. In addition, Member Co-op City Market, Onion River Co-op in Burlington, VT, presented on their inspiring evolution and growth to becoming one of the highest selling single store co-ops in the country and then a vibrant and growing multi-store coop.

“The impact study that Central Co-op completed last year gave us inspiring metrics to share with the community: we learned that more than 52 cents of every dollar spent at Central Co-op stays in Washington State (compared to 23 cents at the average national grocery chain),” said Susanna. “Our members, neighbors, and even public officials have been wowed to learn what a powerful engine our Co-op is in the local economy. Presenting with the NFCA was especially fun because together we were able to demonstrate the value of measuring and communicating the out-sized impacts that Co-ops have in their communities – from coast to coast!”

As the NFCA looks back on 10 years since its first impact study completed in 2008, executive director Erbin Crowell shared preliminary statistics from a survey of member co-ops that were part of the original study. These numbers show exciting growth and help tell the story of the continued importance of food co-ops to our regional food system and economy.

“In a very competitive environment, food co-ops in the Northeast have continued to grow over the past decade — and to increase in our impact for local communities,” said Erbin. For example, among the 17 co-ops that participated in our original impact study, shared revenue grew almost 40% to over $224 million. Membership grew by a similar percentage, from 64,000 to more than 88,000, while employment grew 20% to 1,485. “By measuring our shared impact together, our food co-ops are contributing to shared success and growing the co-operative economy in the Northeast,” said Crowell.

Taken together, the member co-ops of the NFCA are locally owned by more than 130,000 people, generate annual revenue of over $300 million, purchase more than $60 million from local businesses, and employ over 2,000 people (2016).

Bonnie Hudspeth, Member Programs Manager, then shared how a deeper understanding of our collective impact has inspired our co-ops to innovate and take on new initiatives in areas such as peer networking, support for start up food co-ops, and Healthy Food Access programs. Suzette Snow-Cobb, Sourcing Coordinator, shared how then presented on how a recognition of our shared purchasing power led to innovative sourcing programs that benefit member co-ops as a group, such as Cave to Co-op (which promotes local artisan cheese producers) and Farm to Freezer, the NFCA’s branded line of regionally grown frozen fruits and vegetables.

Check out Measuring and communicating Our Impact for Shared Success presentation: http://nfca.coop/coopdifference/

This year’s International Day of Co-operatives, held on Saturday, July 7th, is focused on “Sustainable Societies through Co-operation.” 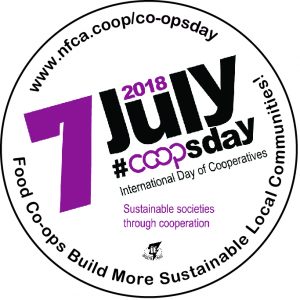 An annual celebration organized by the United Nations, Co-ops Day is an opportunity to promote the role of co-ops in building global peace and economic security. Your local co-ops and credit unions play an important role in enabling people to meet their own needs and build stronger, more sustainable communities. And together, they are part of an international effort to make the world a better place today, and for future generations.

Learn more at your local Food Co-op or visit http://nfca.coop/Co-opsDay

The Future and Co-operative Democracy 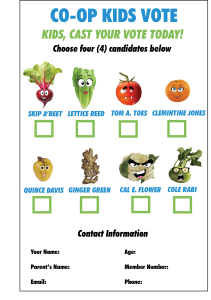 “We need young people to bring their ideas and engagement to the world stage so they can help solve the complex problems created by the generations that came before them. Co-operatives can provide these young people with an outlet for their altruism and creative energy. It all starts by reaching out to them, one election, and one young person, at a time.”

“This year’s election also attracted a new group of engaged, conscientious participants: children. Nearly 150 future co-operators participated in a fun, special election geared toward kids, an inspired approach to member outreach that introduced our youngest members to the principles of co-operative democracy.”

This was more than just a fun exercise. Spearheaded by Emily Rogers and April Turner-Girard in our Outreach Department, the goal was to get kids excited about being part of a cooperative. Like April and Emily, we all have a responsibility to reach out to young people about the work we do and why we do it…”

When you purchase the NFCA’s Northeast Grown Frozen Fruits & Vegetables, you are not only making a good decision f 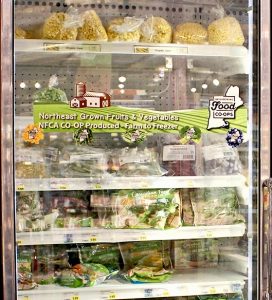 or yourself and your family, you are helping to grow the local economy. Our frozen Blueberries, Organic Broccoli, Organic Edamame, Organic Green Beans, and non-GMO Sweet Corn are all produced, picked, processed, and packed right here in the Northeast.

It’s most nutritious to eat vegetables right after harvest. But here in the Northeast, our harvest season is just a few months out of the year. Freezing close to harvest retains the nutrients with studies showing little or no loss of vitamins, minerals and antioxidant activity.*

So, while we wait for the local harvest, you can choose Northeast Grown Fruits and Vegetables and support our local growers without sacrificing nutrition. Our co-ops have sold over 4 tons of frozen fruits and vegetables through the Farm to Freezer program last year–one of the ways our co-ops work together to bring you the fresh, quality food all year long.

Bring along Mt. Alice for your next picnic or family gathering. It pairs well with strawberries, cider, sparkling wine or Champagne. This organic farmstead cow milk cheese is made 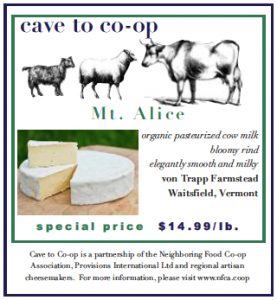 by Sebastian and Dan von Trapp in Waitsfield Vermont.

From 1959, when Werner and Erika von Trapp purchased the von Trapp Farm, it has been a working dairy. Over the course of three generations, the farm has transitioned to a certified organic dairy and in 2009 added cheese making to the value-added operations.

Mt. Alice is named after a distinct mountain peak southeast of the farm. This bloomy rind Camembert-style cheese is an elegantly smooth milky delight made from the farm’s organic pasteurized cow milk and aged for three to five weeks. Mt. Alice is perfect on a cheese plate and makes a great easy lunch, thickly smeared on a crusty baguette.

For more information on Cave to Co-op, visit:

ay advanced its version of the 2018 Farm Bill by a vote of 20-1. Senate Majority Leader Mitch McConnell signaled he intends to bring the bill up for a vote on the floor prior to the Senate’s July 4 recess.

“Today’s farm bill markup in the Senate Agriculture committee embodied the bipartisan, cooperative spirit that federal agriculture policymaking has traditionally enjoyed. We commend Chairman Roberts and Ranking Member Stabenow for their hard work and leadership to advance a farm bill this year.

“We’re encouraged by a number of amendments that were approved today that will strengthen the bill. Refunding dairy Margin Protection Program premium payments made between 2015-2017, restoring funding for bio-based programs, and removing separate payment limits for organic producers in EQIP, will all help struggling producers.

“Family farmers and ranchers need the certainty and support of a strong Farm Bill this year, especially given the dramatic drop in net farm income in the years since the 2014 Farm Bill was passed and signed into law, and given the ongoing trade disruptions. Farmers Union encourages the Senate to continue the bipartisan work witnessed today and pass a farm bill that shores up the safety nets for farmers and consumers, promotes farm and ranch sustainability, and ensures fair and diverse markets for family farmers. We look forward to additional improvements as the bill progresses through the Senate.”