In 1919, 94 farmers from the communities around

Cabot, Vermont joined forces to purchase the village creamery and began producing butter and shipping fluid milk as a Dairy Co-operative. The cost of joining the venture was $5 per cow and over the next two decades the Cooperative thrived. In 1930, cows outnumbered people in Vermont by 421,000 to 359,000. That same year, Cabot began making cheese. By 1960, 600 farm families had joined Cabot Co 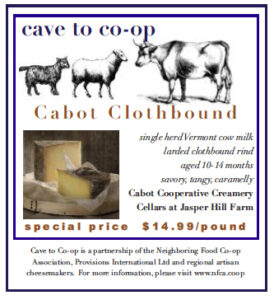 operative. But as the years went by the number of farms in Vermont diminished and in the 1980s sunk below 2000, less than one fifth of what it had been just a few decades before. In 1992, Cabot Co-operative joined forces with Agri-mark, a southern New England Co-op dating back to 1918. Today the combined Cooperatives include more than 1,200 farms in New England and upstate New York.

In 2003, Cabot Creamery asked Jasper Hill Farm to age a special batch of English-style clothbound cheddar. This was thebeginning of a revolutionary partnership. Kempton Family Farm in Peacham, VT was selected as the sole milk source for Clothbound, and Cabot makes this extraordinary cheese the old-world way – one vat at a time.

Once unmolded from their shaping hoops, the infant wheels are individually wrapped with muslin and brushed with lard before they undergo a ten to fourteen month maturation period.  The extra care involved in curing a clothbound cheese requires a customized aging environment, with proper temperature, humidity, and airfl 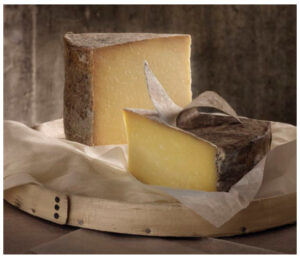 ow. The cheddar vaults at the Cellars at Jasper Hill are majestic and awe-inspiring – Cabot Clothbound is truly a monumental undertaking. A team of affineurs practice a constant cycle of care for Clothbound and the wheels are tested, tasted, and monitored for quality during their entire life cycle.

Cabot Co-operative Clothbound Cheddar is best enjoyed on its own with a slice of crisp new apple or pear. It has all the characteristic texture of an English-style bandaged cheddar; smooth and dense, slightly brittle, with the sweet caramel and milky flavors that set it apart from other clothbound varieties. It is simultaneously sweet, savory, nutty and tangy.

We can also recommend using Cabot Clothbound in the kitchen. Here are a few recipes, courtesy of Cabot, that utilize this cheddar at its best!