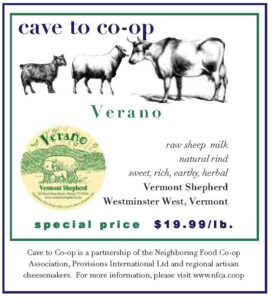 sheep and mixed milk cheeses. David and Yesenia Ielpi Major and their family pasture and milk the sheep, make and age the cheese on a 250 acre farm in Westminster West, Vermont. Vermont Shepherd cheeses are descended from a variety of Pyrenees mountain cheeses, which is fitting because a large half of their family is Spanish. The cheese has won awards for Best Farmhouse Cheese in the country and Best of Show in the American Cheese Society’s annual competition since 1993. Today their family makes cheese in small, 10 to 30 wheel batches. Vermont Shepherd has been featured in The New York Times, Gourmet, Food and Wine, Esquire, and more.

Yesenia grew up summer’s milking cows on her dad’s farm in the Dominican Republic. David grew up tending his dad’s sheep in Vermont. Together, they make a mixed milk cheese called Invierno (winter) and a classic pure raw sheep milk tomme called Verano (summer). Verano has won many awards, including Best in Show at the American Cheese Society. The Robb Report called it “possibly the best sheep milk cheese in America.” Verano is a smooth and creamy, semi-hard cheese with a sweet, rich and earthy flavor. The rustic wheel has a rough, golden brown rind. David and Yesenia make cheeses only during pasture season when the sheep graze on clover, grasses and wild herbs.

Verano is superb on a cheese plate with some rich and tart cherry preserves, tomato jam or quince paste and some crusty wheat or olive bread. Here are a few recipes to try as with this fine summer seasonal cheese. 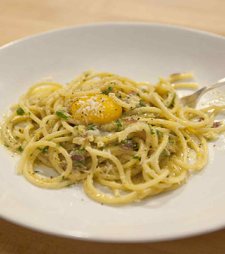 Fill a large pot with 8 quarts of water and bring to a boil. Add 3 tablespoons salt and return to a boil. Meanwhile, in a very large skillet, heat olive oil over medium heat. Add onion and cook until soft and lightly golden, 7 to 9 minutes. Remove pan from heat. Add pasta to boiling water and cook, according to package directions, until almost al dente. Drain, reserving 1 cup cooking water. Transfer pasta to skillet, along with 1/2 cup reserved cooking water. Place skillet over medium heat. In a medium bowl, beat eggs and season with salt and pepper. Add eggs to skillet along with the Verano cheese; gently mix to combine. Let cook until eggs just begin to set, but not scramble. Remove from heat and add parsley and Parmigiano. Divide evenly between serving bowls. Top each with an egg yolk, if desired, season with pepper; serve immediately.

Cave to Co-op is a partnership between Provision International and the Neighboring Food Co-op Association (NFCA) to support local, artisanal cheese producers in our region and make their products more easily available to co-op shoppers.  The NFCA is a network of more than 30 food co-ops in our region — including yours — that are working together to advance their vision of a thriving regional economy, rooted in a healthy, just and sustainable food system and a vibrant community of co-operative enterprise.  For more information, please visit www.nfca.coop.