The Neighboring Food Co-op Association (NFCA) held its Fourth Annual Meeting on March 21st, hosted by the Putney Food Co-op at the Putney School in Vermont.  The meeting brought together nearly 100 co-operators from 35 food co-ops, start-up initiatives and partner organizations from across our region for networking, strategic dialog and workshops. 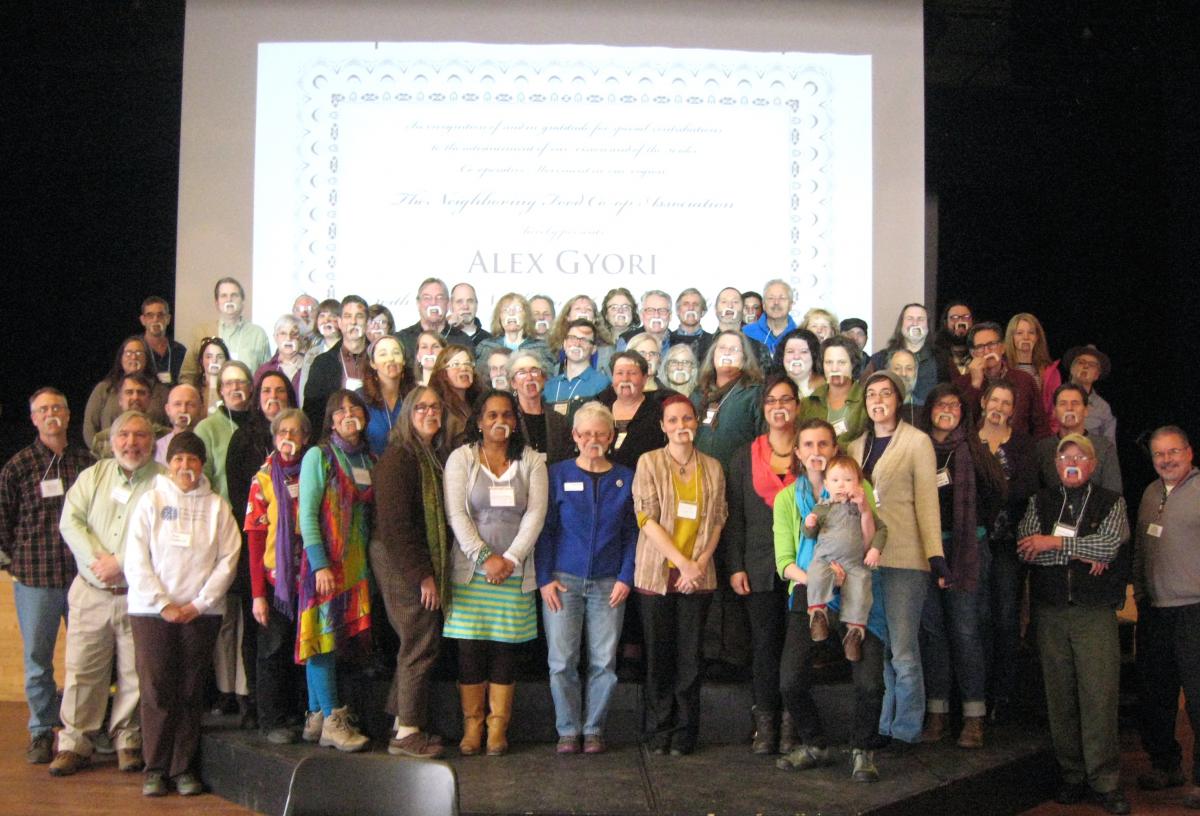 NFCA President Glenn Lower, General Manager at Middlebury Natural Foods Co-op (VT), welcomed attendees. “I always look forward to the gatherings of the Neighboring Food Co-op Association and the opportunity to reconnect with friends from our community,” said Lower. “Participating in the NFCA continually reinforces for me that our long-term success as a co-operative movement is predicated on our ability to combine our efforts to reach common goals.”

Executive Director Erbin Crowell and Bonnie Hudspeth, Marketing and Outreach Manager, reported on the activities of the past year, and NFCA’s priorities moving forward. “There is renewed interest in food co-ops and the impact we have on the food system and local economies,” said Crowell. “At the same time, new competition in the marketplace means that our members need to be excellent grocery stores AND excellent co-operatives.”  For more on this, check out NFCA’s 2015 Annual Meeting presentation: www.nfca.coop/membergatherings.

In 2014, the NFCA worked to provide member co-ops with peer networking events to support business success, develop opportunities for regional sourcing, increase awareness of the impact of co-op across our regional food system and economy, and explore ways to collaborate with partner organizations to achieve shared goals.

For example, a grant completed in collaboration with the New England Farmers Union, the Co-operative Fund of New England and Hunger Free Vermont supported the development of successful “Healthy Food Access” programs among 7 member food co-ops. “By working together, our food co-ops have dramatically increased the success of Healthy Food Access programs,” said Bonnie Hudspeth. “And in the process, we have raised the profile of our food co-ops as community-owned, democratically governed grocery stores with a unique role to play in addressing food insecurity.”

Healthy Food Access was also a major theme of NFCA’s outreach last year, and was woven into presentations at the Consumer Co-operative Management Association conference, the Slow Living Summit, and workshops in the first ever “Co-op Track” at the Northeast Organic Farming Association Summer Conference, organized by the NFCA in collaboration with partner organizations. Overall, we reached more than 500 people through our direct presentations at events.  And, building on our collaboration with the UMASS Economics Department and the Valley Alliance of Worker Co-ops, we launched a new course, ECON105: Introduction to the Co-operative Movement.  Over 120 students completed the course delivered by NFCA’s Erbin Crowell, and it is being offered again in 2015, and still remains one of the only undergraduate courses in the country focused entirely on the history, philosophy and practice of co-operative enterprise.

The theme of communicating the co-operative difference was continued by Jerry McGeorge, Vice President for Co-operative Affairs at Organic Valley, a co-op for organic farmers with members across the United States, in his keynote presentation to the gathering. “Co-operators are idealists and tend to be humble, which is good,” said McGeorge, who also serves as chair of the board of directors of the National Co-operative Business Association. “However, we need to be better at telling our story, telling the people in our lives why co-ops are a superior business model.  This is my challenge to you.”

A consistent theme of NFCA gatherings over the past few years has been alignment with the goals of the International Co-operative Alliance’s “Blueprint for a Co-operative Decade,” which envisions co-operative enterprise as the fastest growing business model by 2020.  At this year’s Annual Meeting, attendees discussed the Blueprint’s priority of “elevating participation within membership and governance,” and considered what food co-ops can do to communicate their unique identity as member owned, democratically governed businesses.

Peer networking topics offered attendees the opportunity for dialog on everything from managing successful capital campaigns to communicating the co-operative difference, to “Building Co-operative Power,” a new book about worker co-ops in our region and their collaboration with other co-ops–such as the NFCA–to grow the Co-operative Economy.  During afternoon workshops, food co-op representatives and partner organizations dug deeper into the topics of building strong, resilient relationships among board members and exploring progress on regional sourcing.

The NFCA includes more than 10 start-up initiatives, which were represented at a session on sharing lessons of progress among start-up organizers. “NFCA is one of the only groups that not only welcomes co-ops before they are open, they provide significant support through networking and training,” said Stuart Reid, Executive Director of Food Co-op Initiative, a national organization providing technical support to start-up food co-ops who helped facilitate the workshop. “Participating in this year’s meeting showed how important this is to the new co-op organizers and made me proud of our co-operative community. Food Co-op Initiative’s mission is advanced by NFCA’s programs, and we look forward to continuing our work together.”

In a fitting conclusion to the day, Kari Bradley, NFCA Board Member and Hunger Mountain Co-op General Manager, announced the establishment of the Neighboring Co-operator award, which acknowledges “special contributions to the advancement of our vision and of the wider Co-operative Movement in our region.” The first annual award was presented to Alex Gyori, General Manager at Brattleboro Food Co-op and a founding Board Member of the NFCA, for his vision and dedication to making the Neighboring Food Co-op Association a reality. Check out the group photo with a fun surprise, as attendees gathered to honor Alex and share their appreciation: www.s.coop/nfcaagm2015.

If your co-op is interested in making a donation to the Howard Bowers Fund in Alex’s honor, please contact NFCA Executive Director Erbin Crowell or contribute at www.cdf.coop.

Want to see who was at this co-op event? www.s.coop/nfcaagm2015

For more information on the NFCA, visit: www.nfca.coop.

WGBY “Connecting Point” produced a fun video on NFCA member The Old Creamery Co-op and the community’s process of converting the business into a co-operatively owned store.

After a long history–since being started as a dairy co-operative in 1886–of serving the residents of the Hilltown communities, the Cummington Creamery embarked on a new chapter to return to co-operative ownership by its patrons and the expansion of its facilities.

WGBY’s Connecting Point Producer Tony Dunne visited the Old Creamery Co-op to share the story of how the owners of this business wanted to preserve its vision and values through co-operative ownership: www.connectingpoint.wgby.org/2015/03/road-hilltowns-cummington-creamery/

Have you noticed the “Cave to Co-op” signs in the cheese section of your neighboring food co-op? March’s “Cave to Co-op” special artisan cheese is “Ayersdale” from Bonnieview Farm in Craftsbury, VT.

Ayersdale is a 100% raw cow milk cousin of Bonnieview’s sheep milk Coomersdale. Made with the milk from their 15 grass-fed cows, Ayersdale is buttery and smooth, with slightly more tang than Coomersdale.  Delicious on its own, Ayersdale also works beautifully in the kitchen.  Find out more about the cheese, including recipe ideas: www.nfca.coop/CaveToCo-opMarch2015

More than 150 attendees from 25 states and Puerto Rico, including three representatives from the Neighboring Food Co-op Association and New England Farmers Union, participated in the 2015 National Farmers Union (NFU) College Conference on Co-operatives in Minneapolis, MN earlier this month. Participants learned how co-operative businesses are adapting to changing environments and heard from co-operative experts from across the nation on why member-owned businesses are thriving.

“This is an opportunity for the co-operative community to teach young people about co-operative business principles and to show them that there are great careers in these dynamic, ethical and community-minded businesses,” said Roger Johnson, President of the National Farmers Union (NFU).

To bring co-operative education to life, students toured housing, retail, and marketing co-ops in Minneapolis and St. Paul. They also visited the headquarters of CHS Inc., the nation’s largest agricultural co-operative, and the Mill City Museum, housed in what was once the world’s largest flour mill. Students heard from co-operative leaders, farmers and government experts who explained current challenges they face, as well as opportunities in an evolving economy.

Jon Shina, a Massachusetts-based student in Greenfield Community College’s Farm and Food Systems program and an employee at NFCA-member Franklin Community Co-operative (MA), said the gathering was an eye-opener.

“The conference was an immense learning experience,” said Shina. “All of the speakers were poignant and they all really drove home the benefits of the co-operative business model.”

“Farmers Union remains true to its roots of both being an advocate for co-operative businesses and offering education programs,” said Johnson. “Our own history is very closely tied with the co-operative movement. Co-operatives were made possible by legislative activity and organized by farmers and ranchers to strengthen the economic opportunities in rural and urban communities. Farmers Union has a strong commitment to providing co-operative education not only to our own members, but also to the general public, and especially to young people, many of whom are just learning about the co-operative way of doing business.”