On March 18th, co-operators from across our region gathered at Greenfield Community College in Greenfield, MA, for the Sixth Annual Meeting of the Neighboring Food Co-op Association (NFCA), “Building a Co-operative Future: Inclusive, Diverse & Resilient.”  The meeting brought together 150 representatives from more than 35 food co-ops, start-up initiatives, and partner organizations.

Keynote speaker for the day was Cornelius Blanding, Executive Director of the Federation of Southern Co-operatives / Land Assistance Fund, as his organization celebrated 50 years of helping African Americans across the South to retain their farms and build economic security through co-operative enterprise.

Blanding challenged attendees with the simple question of What If…? “What if the residents of communities truly owned the economic base and infrastructure of their communities?” he asked. “Well, what if is possible. Because what we’re talking about are co-operatives. Organizations, businesses, economic bases, infrastructure that are owned by the people that use and benefit from them.” The answer to the challenge of food justice, continued Blanding, is ownership through co-ops.

“The NFCA Annual Meeting was a life changing event. I’m convinced now, more than ever, that the co-op model of community building is the only way forward as a neighborhood, a city, a state, a nation,” said James Jeter, start-up organizer with Hartford Food Co-op and Policy Analyst with Hartford Community Loan Fund.

Wanna see how our co-operators connect? Check ’em out: http://s.coop/nfcaagmphotos2017

To wrap up the day, founding Board Member Glenn Lower, General Manager at Middlebury Natural Foods Co-op (VT) was thanked for his service, and NFCA President Suzette Snow-Cobb named outgoing Board Member Kay Litten the 2017 “Neighboring Co-operator” for her special contributions to the advancement of the vision of the NFCA.  A former Board Member and past President of the Hanover Consumer Co-operative, Litten has served two terms on the NFCA Board of Director and has been a tireless cheerleader for our work together. Individuals and organizations are invited to make a tax-deductible contribution in honor of Kay Litten to the Bowers Fund, which supports training and education for food co-op staff, managers, and board members: www.cdf.coop/nfca. 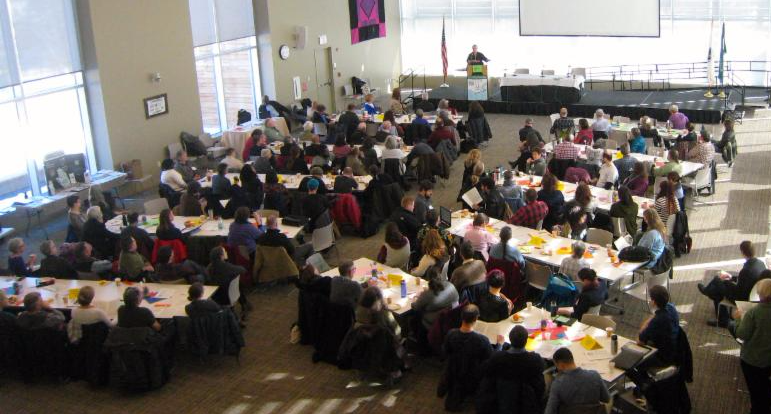 At the 6th Annual Meeting of the Neighboring Food Co-op Association (NFCA) in March, outgoing Board Member Kay Litten was honored with the organization’s “Neighboring Co-operator” Award for 2017.

The annual award acknowledges individuals for special contributions to the advancement of the NFCA and of the wider co-operative movement in the Northeast.

A former Board Member and past President of Co-op Food Stores (Hanover Consumer Co-operative Society) of New Hampshire and Vermont, Kay was elected to the NFCA Board of Directors in 2012 and went on to serve two terms. She was recognized as a tireless participant in and advocate for the association, which includes more than 35 food co-ops and start-up initiatives across New England and New York.

“Kay may have set the gold standard for involvement as a Board Member from one of our member co-ops serving on the NFCA Board,” said NFCA President Suzette Snow-Cobb. “Kay’s dedication and persistent championing of her home co-op and all of our food co-ops has been inspiring.”

As a co-operative federation, the NFCA is overseen by a Board of Directors made up of General Managers, Staff, and Board Members elected by and from among its member food co-ops.

“Our growth and success is, in large part, thanks to the commitment of our Board of Directors,” said Erbin Crowell, Executive Director of the NFCA. “Kay’s feedback, guidance and support will be greatly missed by staff, and we look forward to keeping her involved in other ways as we move forward.”

Individuals and organizations are invited to make a tax-deductible contribution in honor of Kay to the Bowers Fund, which supports training and education for food co-op staff, managers, and board members: www.cdf.coop/nfca.

As a federation of food co-ops, the Neighboring Food Co-op Association (NFCA) focuses on supporting the shared success of its members through organizational partnerships and peer to peer collaboration.

For the past three years, the NFCA has been organizing monthly peer networking calls for member start-ups as they work to open new food co-ops. Jacqueline Hannah, Food Co-op Development Specialist at Food Co-op Initiative has regularly presented on and supports these calls, and has recently helped to replicate this model of peer learning across the country. She writes about the impact of peer start-up calls in in the latest edition of Cooperative Grocer:

“Peer calls are not a new phenomenon in the world of food co-ops, but this particular iteration of calls, aimed expressly at the needs of startup food co-op organizers, started in late 2014 and is, arguably, uniquely effective.’

“The peer calls for startups were founded by Bonnie Hudspeth, the Member Programs Manager at Neighboring Food Co-op Association (NFCA) and formerly the project manager ofthe Monadnock Food Co-op through its development and opening in early 2013.

Said Hudspeth, ‘At Neighboring Food Co-op Association’s annual member meeting in the spring of 2014, we convened a peer conversation for startups and talked with our associate member startups about how we could better connect throughout the year for shared learning and support. And, I was working directly with Food Co-op Initiative (FCI) staffer Suzi Carter on how we could better coordinate and leverage our network of start up co-ops for regional support.'”

“The partnership evolved into one monthly call for just three startups in the New England region that NFCA served. Three years later, there are seven call groups happening in three regions of the country, serving two dozen startups plus requests for calls in more regions. Three regional cooperative development centers are organizing these calls currently: NFCA, the Indiana Cooperative Development Center (ICDC), and the University of Wisconsin Center for Cooperatives (UWCC).”

“‘The peer calls have been a tremendous asset and support to my work!’ shares Heather Avella, project manager for Manchester Food Co-op in Manchester, N.H. ‘We often would joke about these calls being our ‘therapy.’ Wise tips and knowledge are gained, but even more invaluable are the relationships developed with people walking in similar shoes.”

“Corey Auger, board member at Urban Greens Co-op in Providence, R.I., also praises the calls, but for slightly different reasons. ‘One of my favorite parts of each call-and what I find incredibly valuable-is when we get to hear from special guests who are experts in the topic of discussion that month. Whether that topic is capital raising, membership driving, general manager hiring, or governing, there is an expert on that subject within the greater co-op community who is willing to volunteer their time to speak with us and answer our questions.'” 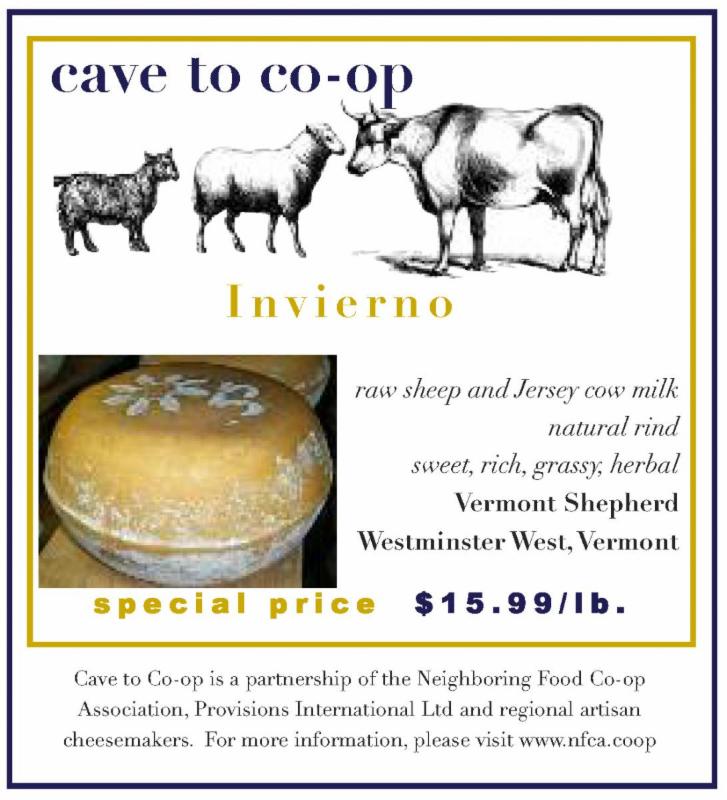 April”s Cave to Co-op special artisan cheese is “Invierno” from Vermont Shephard in Westminster West, VT.  Invierno is a versatile cheese with a rich, butter and mushroom flavor. It melts well and it’s delicious with cider, beer and rich savory red wines.

Try one of these seasonal recipes: https://nfca.coop/CaveToCo-opApril2017

In a sweeping and regressive executive order on energy, President Donald Trump reversed years of progress in the U.S.-led fight against climate change. The order dismantles critical Obama-era policies that prepare the United States to mitigate and adapt to the effects of climate change

Climate change jeopardizes American food security and the livelihoods of American family farmers, ranchers and rural residents,” said National Farmers Union (NFU) President Roger Johnson. “This executive order sends a very clear message to Americans and the rest of the world that our country will not lead the global effort to curtail climate change. It also stems any further progress the United States can collectively make to thwart the severe effects of climate change.”

Trump’s executive order rescinds more than half a dozen federal regulations and guidance that aid in making the U.S. food system more climate resilient. This includes an August 2016 White House guidance for federal agencies to consider climate change in environmental reviews and a November 2013 order instructing the federal government to prepare for the impacts of climate change.

“For American farmers, truck drivers, shipping companies, distributors, retailers, and consumers, climate change poses very real and immediate threats to their pocketbooks,” said Johnson. “By disregarding climate change science and considerations, the president is putting our nation’s food system, and those that rely upon it, at risk.”

Obama-era climate policies created a path of sustainability for family farmers and ranchers dealing with climate change by curbing carbon emissions that trap heat and change the climate. They also paved the way for agriculture to be a major contributor to reducing the amount of carbon in the atmosphere and moved the needle toward compensating producers for environmental services, Johnson noted.

“Considering family farmers’ and ranchers’ potential for sinking major amounts of carbon in their soils, agriculture needs to be engaged by the administration and to be a leader in the movement to mitigate climate change,” said Johnson.

“Discounting climate implications hinders our nation’s ability to protect it’s food system. NFU urges the administration to consider the devastating effects of climate change on the livelihoods and well-being of family farmers, ranchers and rural communities.”