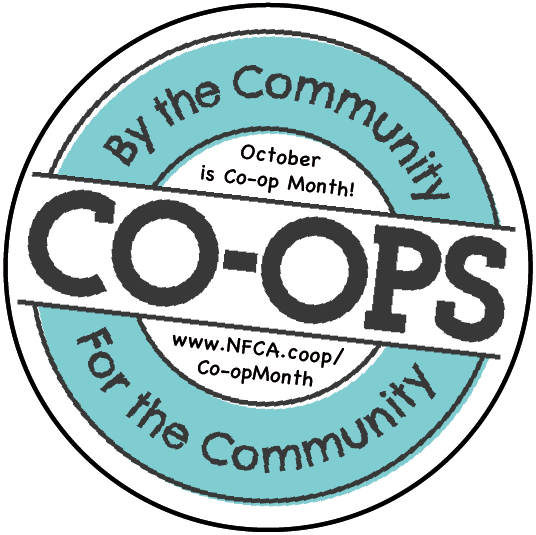 This October, your Neighboring Food Co-ops are joining over 40,000 co-operatives and credit unions across the United States in celebrating Co-op Month, observed nationally since 1964.  This year’s theme, “Co-ops: By the Community, For the Community,” was chosen by the National Cooperative Business Association to promote how co-operative enterprises enable people to work together to meet their needs and build stronger communities.

Across the Northeast, people have used food co-ops to improve access to healthy, local, affordable food, and build stronger communities. While most of these grocery stores got their start more than 30 years ago some began in the 1930s and 40s, and a new wave of startups have opened their doors in the past ten years, representing renewed interest in food security and community ownership. Today, the Neighboring Food Co-op Association (NFCA) includes over 35 food co-ops and start-ups, locally owned by more than 150,000 members and employing over 2,300 people. Together, these co-ops generate shared annual revenue of $340 million, including sales of $93 million in local products.

“By working together, food co-ops in our region are supporting our local farmers and co-op producers,” said Suzette Snow-Cobb, sourcing coordinator for the NFCA.  “What better way to build more vibrant, sustainable communities than to invest in our regional food system and support producers who also value fair, sustainable, and inclusive practices?”

Food co-ops are not alone in their contribution to more resilient local communities.  From farmer co-ops to worker co-ops, credit unions to mutual insurance, and housing co-ops to energy co-ops, co-operative businesses thrive across the U.S. economy, where 350 million people are co-op members.  Nationwide, co-operatives generate $514 billion in revenue and more than $25 billion in wages, according to a study conducted by the University of Wisconsin Center for Cooperatives.  And because they are member-owned, co-ops are rooted in their communities and governed by the people who use them to meet their needs, rather than outside investors.

Stop in at your local food co-op to learn more about the co-op difference.  And while you’re there, look for the “Go Co-op” signs on the shelves that identify products that were made by other co-operatives.  You may be surprised by what you find, including dairy products from Cabot Creamery Co-op and Organic Valley, fresh produce from Deep Root Organic Co-op, fairly traded coffee, tea, and chocolate from Equal Exchange, beverages such as Katalyst Kombucha and Green River Ambrosia from the Artisan Beverage Co-op, seeds and bulbs from FEDCO, naturally fermented vegetables from Real Pickles, Northeast Grown frozen fruits and vegetables from your Neighboring Food Co-ops — and many others.

To find a food co-op near you and for more examples of how co-ops build stronger communities, please visit www.nfca.coop.