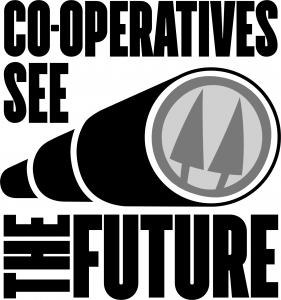 This October, Your Neighboring Food Co-ops are joining over 40,000 co-operatives and credit unions across the United States in celebrating Co-op Month, observed nationally since 1964. This year, the National Cooperative Business Association has chosen “Co-operatives See the Future” as the theme for the month, inviting co-op members to work together to make the world a better place, now and for future generations.

“From healthy food to organic agriculture, Fair Trade to building stronger local economies, good jobs to alternative energy, food co-ops have been pioneers, empowering people to work together to make the world a better place,” said Erbin Crowell, Executive Director of the Neighboring Food Co-op Association (NFCA).  “And as our co-ops look to the future, we are working to build a more fair, sustainable, and inclusive economy that works for everyone.”

A little over a decade ago, the co-ops that would later form the NFCA began envisioning how the future might be different if they worked together.  As a first step, they commissioned a study to better understand their shared impact. At the time, few would have guessed that these 17 co-ops had a combined membership of 64,000 people and annual revenue exceeding $161 million. They also had a dramatic impact on local economies, including sales of more than $52 million in local products and jobs for over 1,200 people. Taken together, food co-ops in Vermont were among the top 25 employers in the state!

This year, the NFCA surveyed the same co-ops to see what changed over the past decade.  Though one co-op from the original study closed its doors, the others have continued to grow, with overall membership expanding 38%to more than 88,000 people who, together, own their local grocery store.  Shared revenue has also increased 39%to over $224 million, with sales of local products growing to $64.7 million.  Employment grew 20%to 1,485, while andwages grew 69%, from $28.6 million to almost $48.3 million, reflecting the commitment of food co-ops to more sustainable jobs.

During the same time, the NFCA as whole has grown, and now includes over 35 food co-ops and start-ups, locally owned by more than 144,000 members and employing over 2,300 people.  Together, these food co-ops generate shared annual revenue of $330 million, including sales of $90 million in local products.

And food co-ops are not alone in their contribution to more resilient local communities.  From farmer co-ops to worker co-ops, credit unions to mutual insurance, and housing co-ops to energy co-ops, co-operative businesses thrive across the U.S. economy, where 1 in 3 people are members of at least one co-op or credit union.  Nationwide, co-operatives create 2.1 million jobs and generate more than $650 billion in sales and other revenue annually. Because they are member-owned, co-ops are driven by the needs of the people who work there or use their products and services, rather than maximizing profit.

Stop in at your local food co-op to learn more about the co-op difference.  And while you’re there, look for the “Go Co-op” signs on the shelves that identify products that were made by other co-operatives. You may be surprised by what you find, including dairy products from Cabot Creamery Co-op and Organic Valley, fresh produce from Deep Root Organic Co-op, fairly traded coffee, tea, and chocolate from Equal Exchange, beverages from Katalyst Kombucha and Green River Ambrosia, seeds and bulbs from FEDCO, naturally fermented vegetables from Real Pickles, Northeast Grown frozen fruits and vegetables from your Neighboring Food Co-ops— and many others.

To find a food co-op near year, and for more examples of how co-ops are building a better future for everyone, please visit www.nfca.coop.

For information and ideas on how co-ops are celebrating Co-op Month, visit www.nfca.coop/Co-opMonth.