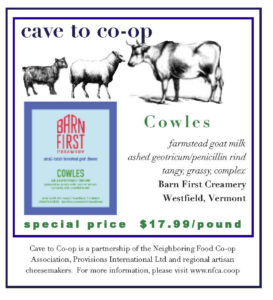 If one wanted to find some of the happiest goats in the state of Vermont, they’d have to go north, so far north that Canada would try sell you a new phone plan. It’s in the small town of Westfield that you would find those goats, and their humans who turn their precious milk into legendary cheeses.

When Rebecca Velazquez and Merlin Backus decided to set down roots outside of NYC, they had no idea of the adventure they were about to start. Returning to Merlin’s hometown of Westfield, Rebecca started working for Laini of Lazy Lady Farm taking a deep-dive into goat herding, cheesemaking, affinage, land management, and animal husbandry. It wasn’t long before Rebecca and Merlin bought some goats from Laini to start their own herd. 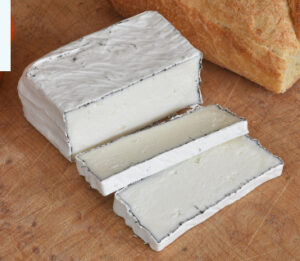 The herd is now roughly 40 goats strong, with goats from the Lazy Lady and Twig Farm herds, and look like punk rockers. Rebecca and Merlin might be Laini’s protégées but they have their own distinct style, making cheeses that complement each other and can appear on a cheese board together.  As for the names of the cheeses, Cowles and all of Barn First’s cheeses take their names from maiden names from Rebecca and Merlin’s family trees.

Cowles is in a square cheese format with a layer of vegetable ash dusted on the rind. The texture is dense and chalky, like a goat’s milk brie cheese, and the flavors are light and mild – tangy and mineral with a hint of goaty musk.  Suggested wine pairing with white wines like Sauvignon Blanc and Chenin Blanc or light and earthy red wines like Cabernet Franc and Merlot. Lagers and Belgian-style beers are also suggested matches for Cowles. 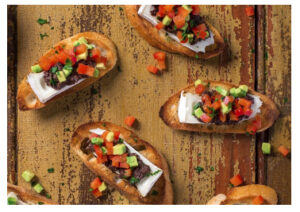 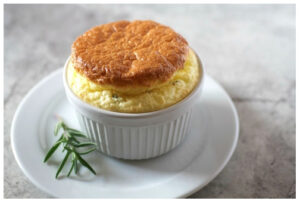 Directions
1. Butter and flour (4) 1 cup ramekins and set aside. Preheat oven to 375°F degrees. Bring the 8 cups of water to a boil in a large pot.
2. In a medium saucepan, melt the butter over low heat. Stir in the flour and cook, whisking constantly, until flour is a pale golden color, about 2 minutes.
3. Turn heat up to medium and gradually add the milk, whisking constantly, until mixture thickens, about 3-4 minutes. Add the Cowles and whisk until cheese is fully melted and incorporated. Add the salt and pepper. Remove the pan from the heat. Lightly beat the egg yolks and add to the cheese/egg mixture, beating until mixture is smooth. Stir in fresh rosemary and set aside.
4. Place the egg whites in a stainless bowl, using a hand mixer or stand mixer, beat until stiff peaks form. Gently fold the egg whites into the cheese/egg mixture until fully combined.
5. Pour the 1/4 of the mixture into each prepared ramekin and fill to the top. Using a clean flat knife, sweep over the ramekin top, removing the excess. Gently place the ramekins in a casserole pan with at least 2 inch sides.
6. Place in oven and, leaving the door open, gently pour the boiling water into the pan until it comes halfway up the sides of the ramekins (being careful not to get any water into the ramekins and soufflé mixture).
7. Gently close oven door and bake for 20-25 minutes, until soufflés have risen and are golden brown on top. Remove from the oven, place each ramekin on a small plate and enjoy immediately

Cave to Co-op is a partnership between Provision International and the Neighboring Food Co-op Association (NFCA) to support local, artisanal cheese producers in our region and make their products more easily available to co-op shoppers.  The NFCA is a network of more than 35 food co-ops in our region — including yours — that are working together to advance their vision of a thriving regional economy, rooted in a healthy, just and sustainable food system and a vibrant community of co-operative enterprise.  For more information, please visit www.nfca.coop.