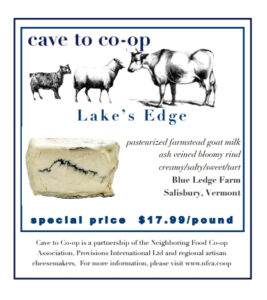 Blue Ledge Farm began as a dream in Florence, Italy where Greg and Hannah met while studying the art and culture of Europe. In 2000, the two began the work of transforming an old cow dairy farm back into production with goats. The barn, which once housed seventy Holstein cows, would now be home to Alpine and La Mancha dairy goats. They began milking four goats at Blue Ledge Farm, and began processing cheese two years later. Today Hannah and Greg milk over one hundred goats and produce eleven types of cheese, from very fresh to semi-aged bloomy rind cheeses, to harder cheeses aged three months. True to their mission with a focus that is always on sustaining a high-quality, consistent product with lots of attention and gentle handling.

Hunger Mountain Co-op highlighted Blue Ledge Farm as their Featured Vendor in December 2018. You can read their in-depth article here.

The 150 acres of Blue Ledge Farm consist of woods, hay-land, pasture and wetland. In 2004 they financed the cheese room construction by selling development rights to the Vermont Land Trust, thereby ensuring that the land will always be open and never developed. In 2009, wetlands were identified as one of the farm’s great natural resources and so they agreed to conserve those fifty acres of wetland and return them to their natural state as a valuable part of the local ecosystem. The goats spend their spring, summer and fall days browsing in the woods, return to the barn for 4 pm milking and lounge around in a grass pasture as evening sets. 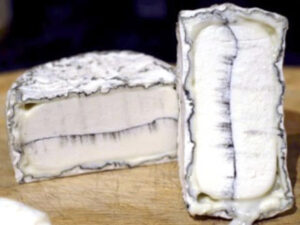 Lake’s Edge is Blue Ledge Farm’s signature cheese: a dramatic ash-veined goat cheese is aged for three weeks and named after the stones found along Lake Champlain. Lake’s Edge is a beautiful cheese with a centerline of ash that contrasts with the chalk white of the paste. The texture is rich and creamy, denser towards the center and the flavor is the perfect balance of sweet, salty and tart. Hannah and Greg recommend slowly devouring its deliciousness with nothing more than a fresh crusty baguette. However, these recipes are worth trying this tasty cheese in as well. 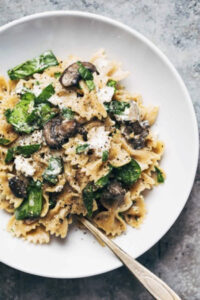 PASTA: Cook the pasta according to package directions. Drain and set aside.

MUSHROOMS: Heat the butter and oil in a large skillet or pot over medium high heat. Add the mushrooms and sauté until golden brown and soft, 5-10 minutes. The mushrooms will cook down and reduce in size. Add the garlic and white wine (it should sizzle a bit), then the whipping cream and salt.

TOSS: In a large pot, toss the pasta with the mushroom sauce from step two. Add some or all of the broth if you feel like you want there to be more sauciness (it sort of depends on personal preference – we had it with the added broth, and without, and it was good both times).

SERVE: While the pasta is still warm, stir in the Parmesan cheese. Just before serving, stir in the spinach and goat cheese, or just top each serving with a few hunks of Lake’s Edge. 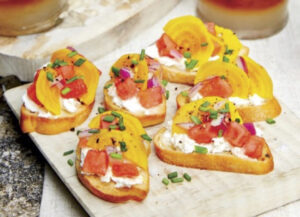