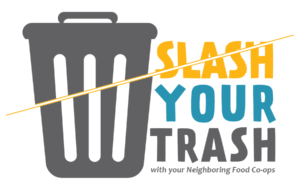 Act Now for climate justice! Join members of food co-ops across the Northeast in pledging to reduce waste and Slash Your Trash during the Month of April — the 52nd Anniversary of Earth Day in the U.S.

Did you know that the 292 million tons of waste (nearly 1,800 pounds per person every year) generated in the US in 2018 was primarily made up of plastics, paper, paperboard, and food?  As individuals we can take basic steps to reduce our waste.  And working together as a community we can have a big impact!

Join your local Food Co-op and co-op members across our region to Slash Your Trash! It’s easily done:

Pledge Participants will be entered in raffles at participating Food Co-ops, with winners announced during Earth Day or Earth Week.

Contact Bonnie Hudspeth for more info on how to get involved: bonnie@nfca.coop

For Food Co-op members to Act Now on Climate Change by reducing the amount of trash they send to the landfill during the month of April — the 52nd Anniversary of Earth Day.

How Your Co-op Can Participate: Challenge Rules

The NFCA is asking participating Food Co-ops to help use track our collective impact by measuring:

Ask pledge participants to share their experience with a friend, with family, or on social media and tag your Co-op AND use the hashtags #SlashYourTrash, #NeighborCoops and #ActNow.  Sample post ideas/content (should feature/tie into what members are doing): 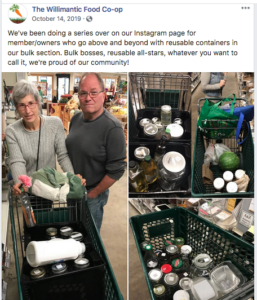 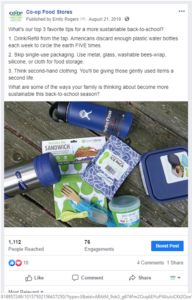 Celebrate, feature, and repost participants of the Slash Your Trash Challenge on all your Co-op channels to spread the word: 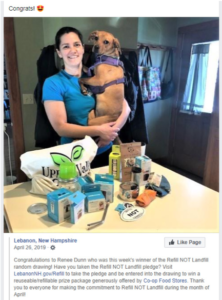 As a co-operative of Food Co-ops across the Northeast, the Neighboring Food Co-op Association (NFCA) works to foster innovation and shared success among its member co-ops.  For example, the theme of “co-creation of value” became a focus of a training on ‘Enhancing Business Performance through Co-operative Management Practices’ for co-op leaders held in October 2019 in partnership with the International Centre for Co-operative Management at Saint Mary’s University.  As a follow up to this training with Professor Daniel Côté, participants collaborated in the development of a “Slash Your Trash” Challenge designed to engage co-op members and shoppers in efforts to address sustainability, waste reduction and climate change.  The goal was to create a template for a campaign that could be easily adopted by member co-ops, incorporated into efforts already being planned for the month of April, and ending with a prize on Earth Day/ Week.  The project is not only an example of the co-creation of value among member co-ops, but builds on the co-operative difference by inviting individual member-owners and shoppers to participate directly in sustainability efforts — co-creating value for their co-op and community, and wider efforts to address climate change.

Special thanks to Professor Daniel Côté of the International Centre for Co-operative Management at Saint Mary’s University for laying the foundation and inspiring us to co-create value with our co-op members, and to our food co-ops leaders who took the training and then came together to plan this first Slash Your Trash Challenge, including creating the name, designing the logo, packet, and details: Emily Hershberger from Buffalo Mountain Food Co-op, Emily Rogers from Co-op Food Stores, Mary Mullally from Hunger Mountain Food Co-op, Becky Colpitts from Littleton Food Co-op, and Shannon Klepner and Karin Mott from Middlebury Natural Foods Co-op.

A co-operative is the property of all its members, which means that all the members are responsible for the results of the co-operative’s activities now and in the future.

Maria Janas, President, Muszynianka Co-op, Poland. In Together. How Co-operatives Show Resilience to the Crisis (2012)