As a member of your local food co-op, you know the difference that co-ops make in your community.  And as part of our celebrations of the Co-operative Decade, the Neighboring Food Co-op Association is profiling other co-operative businesses that are building a thriving co-operative economy in our region.

Pedal People is a worker co-operative located in Northampton, Massachusetts that provides bicycle-powered delivery of groceries, as well as hauling for yard waste, recycling, and trash. The co-op has been expanding in recent years, reflecting community interest in more sustainable ways of living, and now includes twelve members.

“I have wanted to be part of a worker co-op since I worked in one in college, and Pedal People in particular has been a great fit,” says Alison Wilson-Pierce, a worker owner hired in 2010.  “Sometimes I can’t believe that I work hauling trash through the snow on a bike, and that I have never felt as positive about another job.”

Supporting the co-operative movement through development of resources and collaboration with other co-ops is a core interest of the worker-owners at Pedal People. As a founding member of the Valley Alliance of Worker Co-operatives (VAWC), a regional association of co-ops in western New England, the collective helps to educate and develop community awareness about democratically owned and managed enterprise.

In 2010, Pedal People members made a decision to put surplus profits to work for the good of the wider co-operative economy by investing in the Cooperative Fund of New England (CFNE), in accordance with the co-operative principles of cooperation among co-operatives and concern for community.  “We didn’t particularly want to put it in a bank, and the idea of putting it into a co-operative fund fit with our ideals,” explains co-op member Alex Jarrett. Pedal People’s investment in CFNE increases the resources available to other co-operatives in the region, strengthening financial options for start-ups, and providing access to technical assistance. 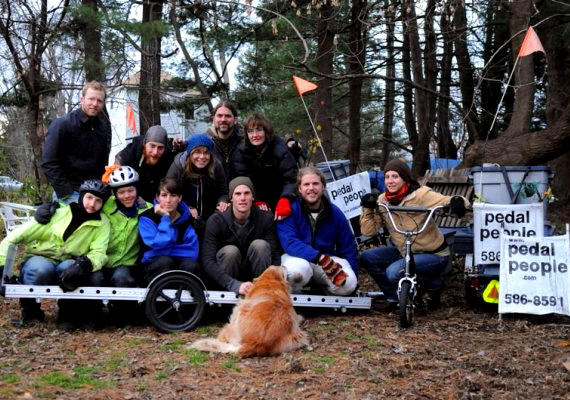 Pedal People actively demonstrates cooperation among co-ops.  Working with the River Valley Co-op Market, they sponsor bike stations at special events to encourage more bicycling to the food co-op and offer outdoor, theft-proof maintenance stations.  Pedal People also delivers local food for Valley Green Feast, a local foods delivery co-op, and do all of their printing with the worker co-op Collective Copies, a digital copying and finishing center.  As they expand their delivery services, they hope to work more with local co-ops.  “One thing I like about worker co-ops is the power of the culture we are creating together.  While most new workers coming into our co-op have some experience with co-operation, I’m impressed by how quickly new people fit into our culture of working together,” says Alex Jarrett.

During the International Year of Co-ops in 2012, Pedal People will celebrate their 10th anniversary and launch an online ordering system for delivery.  They are also working with an intern from the UMass Co-operative Enterprise Certificate program who is doing research on expanding their delivery services.

Profile written by Kalista Aird for the Cooperative Fund of New England, www.coopfund.coop.