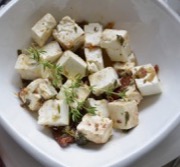 A variety of goat, cow, and sheep milk cheeses are produced at this small family operation where Charlie and Jane, and their adult children, Mathew and Allison, are involved in all areas of production, marketing, and affiance. Charlie and Jane use a traditional feta recipe, the cheese is brined for several months before being packaged in marinade for sale. 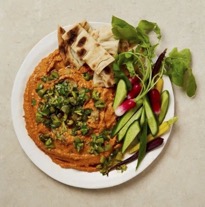 Heat the oven to 465ºF Put the pepper quarters, tomatoes, chili, onion, two tablespoons of oil from the marinated feta, a half-teaspoon of salt and plenty of pepper on a large oven tray lined with baking paper and toss to combine. Roast for 20 minutes, give everything a stir, then add the garlic cloves and roast for 15-20 minutes more, or until everything is softened and colored.
Leave to cool, then peel the peppers and tomatoes, and discard the skins.
Transfer everything to a food processor, add the almonds, feta, half the ground toasted spices, two tablespoons more of oil left over from the marinated feta, a quarter-teaspoon of salt and a good grind of pepper, and blitz smooth. Refrigerate to cool completely (and set slightly).
Meanwhile, using a small, sharp knife, trim the top and tail off the lemon. Cut down along its round curves, removing the skin and white pith as you go. Release the segments from the lemon by slicing between the membranes, then roughly chop each segment in two or three pieces.
Put these in a bowl with the olives, coriander, the remaining two tablespoons of oil and the remaining ground toasted spices, and mix to combine.
To serve, spread the dip on to a wide, shallow plate and spoon the olive mixture into the center. 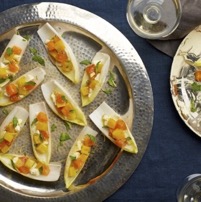 1. Let cheese sit at room temperature while you prepare the rest of the ingredients.
2. In a small saucepan, boil beets in salted water until fork-tender, 20 to 25 minutes. Do not overcook; they should still have a bit of firmness to them. Let beets cool, and then slip off the skins with your fingers. Cut the beets into 1/2-inch cubes and place in a medium bowl.
3. Cut the tops and bottoms off the persimmons, then run a knife between the peel and the flesh to cut off the peel. Cut flesh into 1/2-inch cubes and add to the bowl with the beets. Add Meyer lemon juice, zest, oil, salt and pepper; toss to combine. Let beet mixture stand 15 minutes to let flavors meld. Taste and adjust the seasoning, keeping in mind the cheese will add some salt to your dish. Depending on the sweetness of your lemon, you may want to add a pinch of sugar.
4. Meanwhile, cut the bottom ends off endive heads to separate the leaves. With a sharp knife, cut a tiny bit off the curved underside of each leaf so that the endive cup lies flat.
5. To serve, place a heaping teaspoon of cheese in each leaf, then spoon a bit of beet-persimmon salad over it. Garnish with torn mint and serve.
6. DO AHEAD: The beets can be cooked up to 3 days in advance and refrigerated. 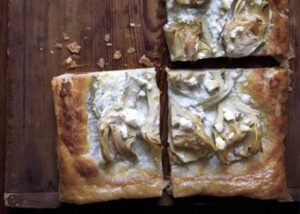 1. Preheat oven to 425°F. Blend cream and 2 ounces feta in a food processor until smooth; season with salt and pepper.
2. If using 14-ounce package of puff pastry, cut in half and roll out each half on a lightly floured surface into a 16×10″ rectangle. (If using 17.3-ounce package, use 1 sheet of pastry for each tart.) Transfer each piece of pastry to a parchment-lined baking sheet. Using a paring knife, lightly score pastry (do not cut all the way through), leaving a 1″ border.
3. Spread feta mixture over pastry, dividing evenly and staying within border. Arrange artichoke hearts over feta mixture and crumble remaining 2 ounces feta over; drizzle with oil. Brush pastry border with egg.
4. Bake tart until pastry is puffed and beginning to brown, 10-15 minutes. Reduce oven temperature to 375°F and continue to bake until pastry is deep golden brown and cooked through, 20-25 minutes longer.
Serve warm or at room temperature 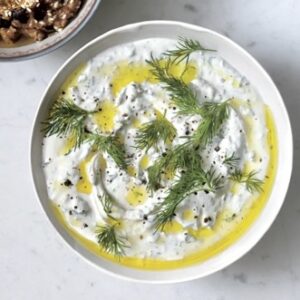 1. Combine all of the ingredients in a food processor
2. Blend until smooth and creamy, adding olive oil until the desired texture is achieved.
3. Put in a bowl and garnish with a grind of peppers and sprig of dill. Serve with bread, pita, crackers, or fresh veggies.