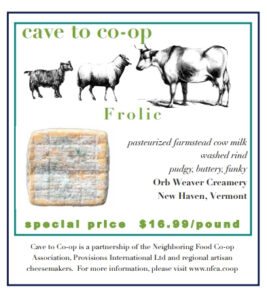 Orb Weaver is an icon of Vermont cheesemaking; the original owners Marjorie Susman and Marian Pollack arrived at the farm in response to an ad for a farm manager. For over 37 years the life partners walked their own path, as a micro-dairy and farmstead cheesemakers, and helped found the farmstead cheesemaking movement in Vermont. Six months after answering that ad, and with the help of a loan from UMass Amherst, they bought the farmhouse and their first six acres. They named the farm after the spiders who weave symmetrical webs in all corners of the farm.

Over the following decades they made cheese, sold vegetables, cared for their land and animals and built a reputation. Time caught up with the pair though; the physically demanding tasks of farming and cheesemaking no longer as easy as they once were. Not wanting to see their 101 acres developed, they sought to protect it with help from the Vermont Land Trust. VLT helps protect the iconic green mountains and ruminant dotted fields for future generations. 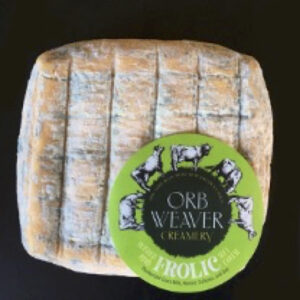 But what about the cows, the creamery, and the cheese?

Through a mutual friend, Marjorie and Marian were introduced to Kate and Zack; Kate making cheese and Zack managing the herd at Shelburne Farms. The two couples hit it off, spending time together; they call it their “dating period,” around the farm and the kitchen table.

Agreeing to a three-year transition period, after which they’d be able to buy the farm, Kate and Zack slowly took over the care of the animals and cheesemaking operation. Marjorie and Marian still live on the farm, and help out in the creamery and field, but are enjoying their semi-retirement.
Orb Weaver Creamery is now producing cheese year round to keep the farm sustainable, which allowed Kate to create cheeses she’d only dreamed of making.
Frolic is a one of the first cheeses that Kate created, and is named after a very special cow. She was a part of Marjorie and Marian’s herd in the early 90’s when they were milking 35 cows, making cheese from that milk, and shipping the rest to a local processor.

All of the cows were tested and given a score for their quality of milk, overall production, and more. During classification, Frolic received an excellent score of 94 as a first calf heifer. Marjorie said she was “quite the looker” and that people came from all over to see Frolic for themselves.

Frolic, the cheese, is a pudgy 1.25 pound square with a peachy colored rind from regular washing, that occasionally has harmless fuzzy white mold. The richness from the Jersey milk shines and balances the slight funk from the rind; and that funk has notes of the barnyard, seared steak, and yeasty bread. 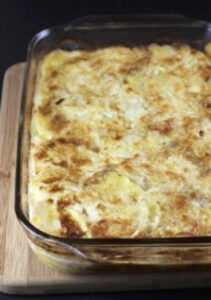 Preheat oven to 350 degrees. Heat a cast-iron skillet or saucepan over medium-high heat. Add butter and olive oil to the pan. When the butter has melted, add the onion and garlic, and saute until soft, about 5 minutes. Season with salt to taste. Take the pan off the heat and add the cream and half of the Parmesan.

Preheat oven to 350 degrees. Heat a cast-iron skillet or saucepan over medium-high heat. Add butter and olive oil to the pan. When the butter has melted, add the onion and garlic, and saute until soft, about 5 minutes. Season with salt to taste. Take the pan off the heat and add the cream and half of the Parmesan.
Transfer half of the onion-cream mixture to a glass 13-by-9-inch baking dish or casserole. Arrange half of the thin potato slices in an overlapping, flat layer on top of the mixture, and then top with 8 of the Frolic wedges. Add remaining potatoes, layering them evenly, the remaining half of the Frolic, and the remaining onion-cream mixture. Sprinkle with the remaining Parmesan.
Cover the dish with aluminum foil and bake for 45 minutes. Remove the foil and bake until top is browned and bubbly, about 30 minutes. Let the casserole cool for 10 to 20 minutes. Serve while still warm or make a few days ahead and store, tightly covered, in the fridge. Reheat, covered, at 350 degrees for about 10-15 minutes.