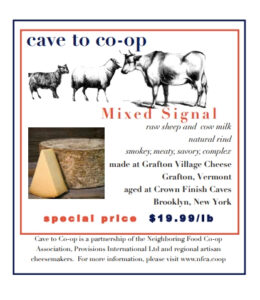 The Grafton Village Cheese Company was founded in 1892 as the Grafton Cooperative Cheese Company, to convert surplus milk from local dairy farmers into cheese. In 1912, the cheesemaking factory burned down and the community had no cheese facility until 1962, when the Windham Foundation restored the factory and brought cheesemaking back to the community. The Foundation is dedicated to promoting the rural communities of Vermont. The profits from Grafton Village Cheese go back into the Foundation to further its commitment to keep rural Vermont alive and thriving. Today, quality and taste are still the hallmarks of the company’s products.

Mixed Signal (and its sister cheese, Smoke Signals) was created at the beginning of October 2019, when two Vermont dairy farms unexpectedly found themselves without a buyer for their milk. Wayward Goose Farm and Indian River Farm both produce high quality, protein rich milk that is specialized for cheese making and is becoming increasingly rare. Grafton Village Cheese Company heard the call, and production began shortly thereafter. Mixed Signal uses the milk from Wayward Goose and Indian River, as well as sheep milk from an Amish community in New York. 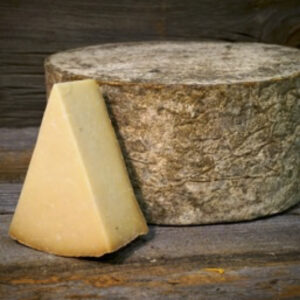 The sixteen-pound wheels are smoked at Grafton before being sent down to Crown Finish, where they get larded and aged for at least five months.

Crown Finish Caves is a cheese aging facility and NYS licensed dairy plant located in the former lagering tunnels of the Nassau Brewery in Crown Heights, Brooklyn.
Thirty feet below the street, the caves were originally designed for fermenting beer and with an average year round temperature of 50 degrees fahrenheit, they provide the perfect environment for aging cheese as well. Crown Finish receives “green cheese”, or cheese around one week old that hasn’t developed a rind yet, from mostly local, artisan producers. The main tunnel currently holds 28,000 pounds of cheese, and it’s almost full.

Crown Finish first opened with the intention of helping small farms keep up with their milk production by selling “green” cheese to them, which they would then distribute and market as a cheese made by both Crown Finish and the cheese farm. Crown Finish Caves markets all of their cheeses that way, working with a wide variety of creameries of all sizes and styles. 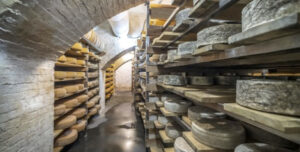 The aging of Mixed Signals in Crown Finish’s unique caves transforms a hint of smokiness at the rind into an umami meatiness that permeates the paste, reminiscent of your favorite aged salami.