As a member of your local food co-op, you appreciate the difference your co-op makes in your community.  And as part of our celebrations of the Co-operative Decade, the Neighboring Food Co-op Association (NFCA) is spreading the word about other co-ops in our region and how they help build a better world.

For example, Cabot Creamery Co-op of Vermont has been in operation since 1919. Owned by the 1,200 farm families of its 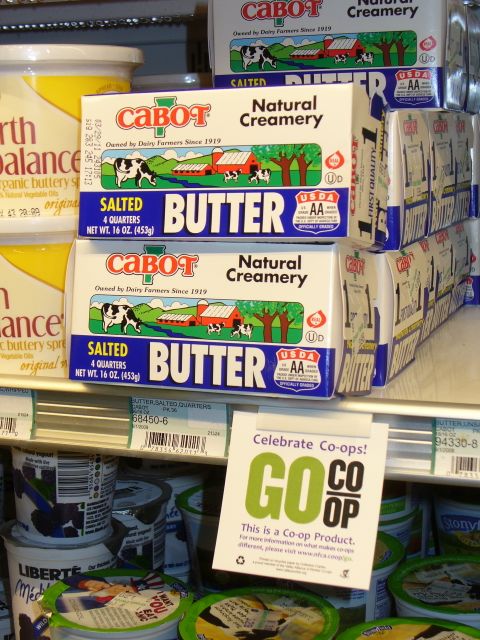 parent co-op Agri-Mark, Cabot operates four creameries — two in Vermont, one in New York and one in Massachusetts.  As one of our region’s best known and most-awarded co-operative brands, Cabot has been honored an unprecedented three times at the World Championship Cheese Contests as makers of “The World’s Best Cheddar.” Today, this regional co-op offers a full line of dairy products including cheese, butter, sour cream, cottage cheese and yogurt.  More recently, the co-op worked with the Cellars at Jasper Hill to create “Cabot Clothbound,” a natural-rinded traditional cheddar that is aged a minimum of 10 months.  This delicious cheese was featured during Co-op Month in 2011 as part of the NFCA’s Cave to Co-op program that offers regional artisan cheeses at an affordable price.

Underlying Cabot’s business success is its commitment to initiating marketing programs among different co-op sectors such as food co-ops, credit unions and energy co-ops.  Community, democracy and local ownership are integral to the co-operative business model — service to, and for, the communities in which members live, work and shop.

“A co-op represents an investment of more than just money,” says Dr. Richard Stammer, President and CEO of Agri-Mark. “Hard work, passion and ownership by our farmers are the true secrets underlying our success. These same values and benefits are universal to the co-operative structure and are fundamental to our mission.”

In this spirit, Cabot works with the NFCA and other partners in the region to grow the wider co-operative movement.  For example, a generous contribution from Cabot that helped launch the Cooperative Fund of New England’s Cooperative Capital Fund, a source of patient capital for co-op development.  And on a national level, Cabot helped launch a new website, www.go.coop, to serve as a gateway to the wider co-operative community. Visitors to the site can find resources on different kinds of co-ops, a video on the movement, and testimonials from co-op leaders.

To that end, Cabot co-sponsored the “Co-ops for Community” Girl Scout Patch booklet in partnership with the National Cooperative Business Association.  The booklet’s activities help girls and young people become more business savvy, understand how co-ops contribute to the communities they serve, and develop business leadership by learning how to form their own co-ops.

To find out more about this free booklet, other co-ops across our region, and resources for celebrating the Year of Co-ops, visit the Neighboring Food Co-ops website: www.nfca.coop/iycresources

Erbin Crowell is Executive Director for the Neighboring Food Co-op Association, www.nfca.coop, and serves on the Board of Directors for the Cooperative Fund of New England, www.coopfund.coop.